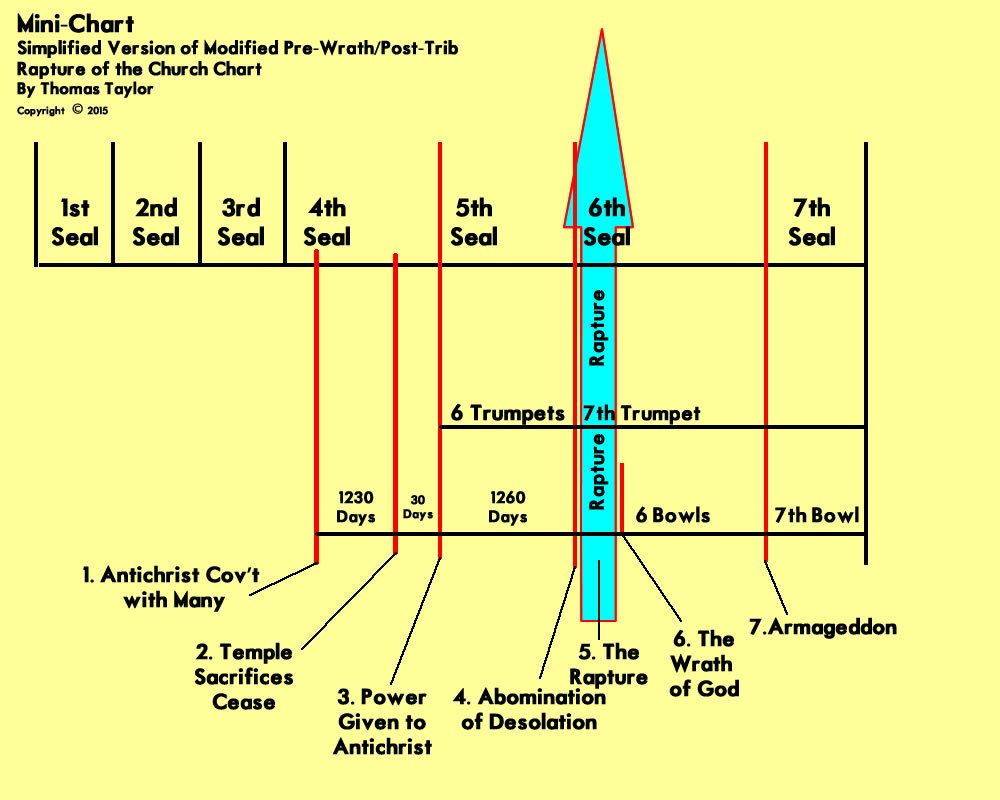 The Abomination of Desolation Timing

At the End of the Great Tribulation

Most teach that the Abomination of Desolation takes place in the middle of Daniel’s Seventieth Week. They base it off of the following Scripture:

Daniel 9:27  And he shall confirm the covenant with many for one week: and in the midst of the week he shall cause the sacrifice and the oblation to cease, and for the overspreading of abominations he shall make it desolate, even until the consummation, and that determined shall be poured upon the desolate.

This is the first mention of this mysterious event called the Abomination of Desolation. It says that the antichrist will confirm, or strengthen, a covenant for seven years.

Is the Abomination of Desolation at the Same Time as the Sacrifice Cessation?

Daniel 12:11  And from the time that the daily sacrifice shall be taken away, and the abomination that maketh desolate set up, there shall be a thousand two hundred and ninety days.

Let’s look at it again:

Daniel 9:27  And he shall confirm the covenant with many for one week: and in the midst of the week he shall cause the sacrifice and the oblation to cease, and for the overspreading of abominations he shall make it desolate, even until the consummation, and that determined shall be poured upon the desolate.

I am suggesting there is a gap of time between the phrase “he shall cause the sacrifice and the oblation to cease” and “and for the overspreading of abominations he shall make it desolate.”  This gap is not arbitrarily added by me but by Daniel 12:11. Many people ignore Daniel 12:11 because it does not fit into their end-time scenario. Or if they choose to include it, they combine the ceasing of the sacrifice and the Abomination of Desolation into one event in the middle of the seven years. However, they terminate the 1290 days with…nothing! They do not know what it terminates with but it is right there in the verse. There is a cessation of the sacrifices then 1290 days later the time period terminates with the Abomination. It is crystal clear.

Does this mean that the Great Tribulation happens after the 1290 days? No. Daniel 9:27 teaches us the sacrifices and oblations cease (which seems to mean the Jews are not allowed to worship God at the temple any longer).  This is the domino that falls causing the Great Tribulation thirty days later at the exact midpoint of the seven years.  What else happens at the middle of the seven years?:

At the midpoint of the seven years, the antichrist will be given authority to continue 42 months. This is the Great Tribulation where he will persecute the Jews and try to dominate the whole world.  Also:

Daniel 12:7 KJV  …it shall be for a time, times, and an half; and when he shall have accomplished to scatter the power of the holy people, all these things shall be finished.

At the end of the Great Tribulation is when Armageddon takes place.

Luke 21:20 KJV  And when ye shall see Jerusalem compassed with armies, then know that the desolation thereof is nigh.

Luke 21:20 even tells us when the Abomination of Desolation takes place. It is when Jerusalem is compassed by armies, which is at the battle of Armageddon. Almost all know that Armageddon is at the end of the seven years. So why does everyone ignore Luke 21? Again, because it does not fit the current manmade end-time scenarios. We cannot omit Luke 21 from our eschatology. It is in perfect harmony with Luke 17, Matthew 24, Mark 13, Daniel and Revelation. If we would accept this simple, however uncomfortable, Truth that the Abomination takes place at the end according to Daniel 12:11, then everything falls into place.

What about Matthew 24? It seems to imply that the Great Tribulation is after the Abomination:

Matthew 24:14-16 KJV  And this gospel of the kingdom shall be preached in all the world for a witness unto all nations; and then shall the end come.  (15)  When ye therefore shall see the abomination of desolation, spoken of by Daniel the prophet, stand in the holy place, (whoso readeth, let him understand:)  (16)  Then let them which be in Judaea flee into the mountains:

Let us notice first that Jesus points out “the end”, THEN the next verse is concerning the Abomination of Desolation.  Again, this is proof that the Abomination takes place at the very end if we are to read Matthew 24 in chronological order – which I believe to be absolutely essential or you would be totally lost in the timing of events. So He talks about the end, then comes the Abomination at which point the Jews are to flee very quickly to the mountains. Next He says…

Matthew 24:20-21 KJV  But pray ye that your flight be not in the winter, neither on the sabbath day:  (21)  For then shall be great tribulation, such as was not since the beginning of the world to this time, no, nor ever shall be.

The Man of Sin Revealed

2 Thessalonians 2:3-4 KJV  (3)  Let no man deceive you by any means: for that day shall not come, except there come a falling away first, and that man of sin be revealed, the son of perdition;  (4)  Who opposeth and exalteth himself above all that is called God, or that is worshipped; so that he as God sitteth in the temple of God, shewing himself that he is God.

There will not be a revealing of who the antichrist is until he goes into the temple and proclaims he is God. This happens at the end of the seven years which is the Abomination of Desolation. If he did it at the middle of the seven years, everyone would know who he is for the last 3 ½ years. If everyone knows he is the antichrist, how could he get anything accomplished? He couldn’t! No one would follow him or give him power knowing he is the antichrist. No one will be deceived by him if they know he is the antichrist. The devil does not want him revealed. But that is what 2 Thessalonians is saying will happen; when he does the Abomination and claims to be God in the temple, all eyes will be opened, all deception will fall to the ground like a curtain. Everyone will know he is the one and then Jesus comes back to destroy him for his blasphemy.

Matthew 24:30-31 KJV  And then shall appear the sign of the Son of man in heaven: and then shall all the tribes of the earth mourn, and they shall see the Son of man coming in the clouds of heaven with power and great glory.  (31)  And he shall send his angels with a great sound of a trumpet, and they shall gather together his elect from the four winds, from one end of heaven to the other.

Jesus will rapture His people and destroy the antichrist and the armies of Armageddon personally. See the charts here for a visual.

I know this scenario is hard to accept at first, particularly if you have been taught end-time sequences of events by most eschatology teachers rather than seeing it in the Bible for yourself. But I strongly urge you to reexamine Daniel 12:11 and see where it fits in your end-time scenario. What happens at the end of the 1290 days in your scenario? Do not take my word for it; I strongly suggest you ask the Lord what Daniel 12:11 means.