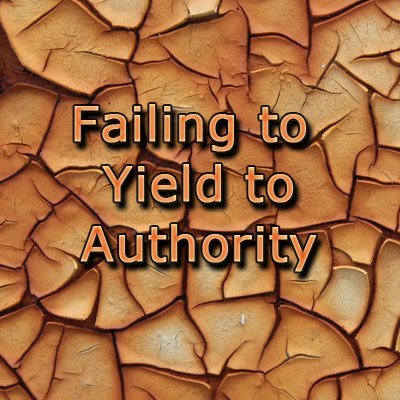 Failing to Yield To Authority

The Source of Every Problem in The World and Life

There is a great parable in Luke 19 that teaches us about the source of every problem in life. I’ll be going verse by verse through this parable to pull out the things we can learn from it.  In this parable Jesus explains all problems in the world and how Jesus will solve them. It’s all about authority! Or maybe you could say it this way, God made the rules and our failure to yield to His rules (sin) is the source of every problem in the world and life. Look back at your life and consider every problem’s source was where someone failed to yield to authority.

Luk 19:12 He said therefore, “A nobleman went into a far country to receive for himself a kingdom and then return.

Luk 19:13 ESV Calling ten of his servants, he gave them ten minas, and said to them, ‘Engage in business until I come.’

Luk 19:14 ESV But his citizens hated him and sent a delegation after him, saying, ‘We do not want this man to reign over us.’

Luk 19:15 ESV When he returned, having received the kingdom, he ordered these servants to whom he had given the money to be called to him, that he might know what they had gained by doing business.

Mat 7:21 ESV “Not everyone who says to me, ‘Lord, Lord,’ will enter the kingdom of heaven, but the one who does the will of my Father who is in heaven.

Many call Jesus “Lord” but He is not their lord unless they do what He says. They have made up a false Jesus that they follow, which is their belly, and when they meet the real Jesus – they will be rejected!

Mat 7:23 ESV And then will I declare to them, ‘I never knew you; depart from me, you workers of lawlessness.’

1) the condition of without law
1a) because ignorant of it
1b) because of violating it
2) contempt and violation of law, iniquity, wickedness

God’s will is God’s LAW! We are free from the penalty of death from breaking the Law, but we are not free from doing It.

Mat 5:17-19 ESV “Do not think that I have come to abolish the Law or the Prophets; I have not come to abolish them but to fulfill them. (18) For truly, I say to you, until heaven and earth pass away, not an iota, not a dot, will pass from the Law until all is accomplished. (19) Therefore whoever relaxes one of the least of these commandments and teaches others to do the same will be called least in the kingdom of heaven, but whoever does them and teaches them will be called great in the kingdom of heaven.

Luk 19:16 ESV The first came before him, saying, ‘Lord, your mina has made ten minas more.’

Luk 19:17 ESV And he said to him, ‘Well done, good servant! Because you have been faithful in a very little, you shall have authority over ten cities.’

Luk 19:20-21 ESV Then another came, saying, ‘Lord, here is your mina, which I kept laid away in a handkerchief; (21) for I was afraid of you, because you are a severe man. You take what you did not deposit, and reap what you did not sow.’

Luk 19:22-23 ESV He said to him, ‘I will condemn you with your own words, you wicked servant! You knew that I was a severe man, taking what I did not deposit and reaping what I did not sow? (23) Why then did you not put my money in the bank, and at my coming I might have collected it with interest?’

Luk 19:27 ESV But as for these enemies of mine, who did not want me to reign over them, bring them here and slaughter them before me.'”

Every problem in the world and life could be summed up as a lack of yielding to authority one way or another. If mankind would obey God, they would not have the problems they are having. If Adam and Eve would have obeyed, then we would not have sin and death. It was a failure to submit to God’s authority. When the demonic attack, it is because they are in rebellion against God’s authority through Jesus Christ. Jesus was given all authority on the earth but they don’t want Him to rule over them and so their activity is a great rebellion. One day, however, every knee will bow and every tongue confess He is Lord” that is after the Day of Judgment when the enemies of God are eternally punished away from the presence of God and all that are left are those who make Jesus their real Lord through OBEDIENCE!