Have You Committed the Unpardonable Sin?

Have You Committed the Unpardonable Sin?

Christians need to realize that they can be lost. It is very clear in Scripture that a Christian can fall away from God, known as reprobation – becoming a reprobate. Once saved always saved is not true, as I have proven is my other articles refuting Calvinism extensively (see https://thomastaylorministries.org/blog/calvinism-refuted-perseverance-of-the-saints/).

Don’t let any man or devil deceive you into thinking living in sin is not a big deal for a Christian because they say, “you’re washed in the blood and get to go to Heaven no matter what you do.” No, if you choose to live in sin, you are on your way to a dangerous path of becoming a reprobate. The great deception I see in the churches today is the belief that the doctrine of grace and mercy means we can live in sin but it is no big deal. It is as if sin doesn’t even exist to the Christian. That is a lie. God’s grace and mercy is for those that have forsaken sin, intending never to do it again. A Christian may sin by accident, but they repent – meaning they turn with the intent in their heart never to do it again. The Christian will never on purpose choose to live day-to-day in that sin.

For example, Christians in a moment of passion may have sexual relations outside of marriage, also called fornication. A true Christian would immediately repent and in their heart never intend to do it again. However, if they intend to just keep doing it and say, “God’s grace and mercy washed away this sin we are going to keep doing. And God understands why we keep doing it; it is because we have needs!” then they are deceived.

You will never see in your Bible a sentence that says, “The Unpardonable Sin is…” There is not specific outward sin that is unpardonable. Whether murder, rape, incest, assault, adultery, lying, stealing,  or cheating, all can be forgiven and washed away like it never happen by Jesus’ blood if repented of.

However, there is a progression to reprobation that leads to being lost forever with no chance of return. This pathway is what I want to write about. It is not so much about a certain sin but it has to do with what is going on in the person’s heart and their motives toward God, Jesus, and the Holy Spirit. It also cannot be committed by someone unless they have reached a certain level of spiritual growth in the Lord.

If I could sum reprobation up into one thought or sentence, I would say it this way: It is the intentional rejection of God by a Christian who has full knowledge of what they are doing.

Qualifications for Losing Your Salvation

To even be able to intentionally reject God one must qualify. Some Christians today do not even qualify, therefore they cannot lose their salvation. However, many do qualify. What are the qualifications according to the Bible?:

Hebrews 6:4-6 NASB  For in the case of those who have once been enlightened and have tasted of the heavenly gift and have been made partakers of the Holy Spirit,  (5)  and have tasted the good word of God and the powers of the age to come,  (6)  and then have fallen away, it is impossible to renew them again to repentance, since they again crucify to themselves the Son of God and put Him to open shame.

Jesus is the Heavenly Gift sent to earth by God to save men. One must have accepted Jesus Christ as saviour and Lord to become born-again, i.e. one must be a Christian. So far all Christian’s qualify but it gets more difficult to qualify after this.

They must have revelation knowledge of God’s Word. Not just listen to a sermon on a Sunday morning but they must be knowledgeable in the Word.

Qualification five: “[tasted] the powers of the age to come” 

This means that they have operated in at least one the the nine gifts of the Spirit at some point: miracles, gifts of healings, special faith, word of knowledge, word of wisdom, discernment of spirits, prophecy, tongues (not just tongues as the initial evidence of being filled with the Holy Spirit but that which is demonstrated for the edifying of the Church), and the interpretation of tongues.

Many people point to blaspheming the Holy Spirit as “the” unpardonable sin. However, that is incorrect. That outward act which Jesus gave as an example is just a part of a bigger principle.  The principle of true reprobation is the knowing and intentional rejection of God in the heart and mind. It is crucial to understand that reprobation is something that happens in the heart first. Then its outward manifestation takes place later, such as blaspheming the Holy Spirit. It is something that takes time. It is a progression over many months or even years. Again, one must also qualify based on the criteria of Hebrews 6:4-6.

The following are a list of other outward examples of reprobation. If any of these are done knowingly and intentionally from the heart after meeting the qualifications, that person is lost forever:

So if one takes the Mark of Beast, they are doing so with the full understanding that they are rejecting God and accepting the antichrist as lord and god. But if someone were to capture a Christian and hold them down while giving them the Mark, that person is not lost. It is not the Mark itself that is important but the intention in the heart behind it.

How Does One Start the Progression Toward Reprobation?

In one word: sin.  Sin is far more dangerous than Christians realize. Sinning itself does not make one lose their salvation or else every Christian would be lost. Every Christian has sinned since becoming a Christian. No, of course God’s mercy allows the sinning Christian time to repent. For as God’s Word states: 1 John 1:9 NASB  If we confess our sins, He is faithful and righteous to forgive us our sins and to cleanse us from all unrighteousness. However, once a Christian sins, the potential is there to continue in that sin. Then the sin could become a lifestyle which is the path to being forever lost.

We need to understand the normal nature of a Christian is to immediately repent when they sin. It is built in to us! That however can change if we start to enjoy the pleasures of sin to the point that we wait longer and longer before we repent. Then sets in the searing of our conscience so that we don’t feel as convicted about our sin as we did in the past. Overtime we start to enjoy the sin more and worry about repenting less.

To repent doesn’t mean to say some words  like, “I repent” but it too is an act of the heart first. It means to absolutely from the heart never intend to do that sin again. If that is the case, we will confess before God we were wrong – essentially agreeing with God that sin is sin. The unrepentant will say that the sin was not sin or that the sin was not a big deal.

When someone moves to the place of an intentional lifestyle of sin, they are lost. They could still repent in this life. However, if they were to die in a state of living in sin, even though they think they are Christians because they believe in Jesus, they are separated from God. If they do not repent, they would be lost forever at death. If they do repent, they can still be forgiven in this life. Therefore, this does not qualify as reprobate. Reprobate means you cannot, nor would you even want to, repent; you have abandoned your faith forever as a reprobate. The lifestyle of sin leads to becoming reprobate.

I have made a chart to illustrate the steps toward reprobation. I made it for myself but I hope it may help you understanding the steps. Romans chapter one goes through the process whereby a Christian can be lost. It is there that you can find most of the concepts I used to create this chart and do further study on reprobation: 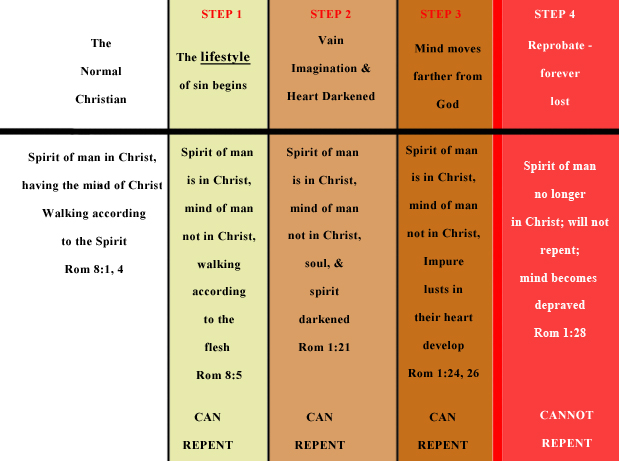 Here is the summary of the reprobate mind:

Romans 1:28-32 KJV  And even as they did not like to retain God in their knowledge, God gave them over to a reprobate mind, to do those things which are not convenient;  (29)  Being filled with all unrighteousness, fornication, wickedness, covetousness, maliciousness; full of envy, murder, debate, deceit, malignity; whisperers,  (30)  Backbiters, haters of God, despiteful, proud, boasters, inventors of evil things, disobedient to parents,  (31)  Without understanding, covenantbreakers, without natural affection, implacable, unmerciful:  (32)  Who knowing the judgment of God, that they which commit such things are worthy of death, not only do the same, but have pleasure in them that do them.