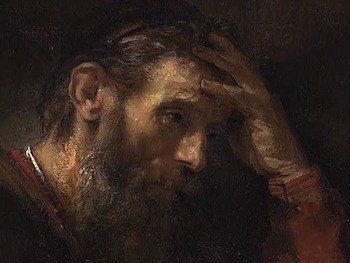 Paul’s Thorn In The Flesh

What was Paul’s Thorn in the flesh? Some say it was an eye disease like ophthalmia which is an inflammation of the eyeball based on Galatians:

Gal 4:15 Where is then the blessedness ye spake of? for I bear you record, that, if it had been possible, ye would have plucked out your own eyes, and have given them to me.

Gal 6:11 Ye see how large a letter I have written unto you with mine own hand.

Others suggest any range of sicknesses to demonic oppression. Some say we can never know what Paul’s thorn was. I believe we can come to a conclusion with some confidence about what this thorn was by comparing Scripture with Scripture . Let’s examine the Scriptures and see what they have to say about it.

From whom was it given; God or the Devil?

God allowed it to happen, obviously, but God did not make it happen. It is evident who made it happen from the passage:

Paul’s thorn was of satanic origin. When God showed this to me it came as a great revelation. I thought God sent Satan to teach Paul a lesson but that was before I knew the Word. God did not send Satan; Satan does not work for God. They just don’t get along too well if you know what I mean. However, Satan initiates attacks , like with Job, and God sets the limits on how far he can go. God will never let Satan attack us to the point of destruction if we are trusting and seeking God with all our hearts (1 Cor 10:13). Satan’s purpose of attack is to kill us, steal from us, and destroy us.

But no matter how severe the attack the devil brings, God always will turn it for our good and deliver us if we trust in Him (Rom 8:28).

Satan is the one that did not want Paul “exalted above measure” not God. This has nothing at all to do with God not wanting Paul exalted beyond measure in pride. It was an attack of Satan who did not want Paul to receive any more revelations from God which would exalt Paul’s ministry, thus, increasing his effectiveness against Satan. Satan’s goal was to keep Paul from being increased in his ministry. Satan’s purpose was to kill, steal, and destroy Paul. Understand most of all that Satan is always the initiator of destruction and this thorn was meant to destroy Paul. It was NOT sent by God.

Was it a physical sickness or disease?

If it was a sickness or disease, then Paul would be a walking contradiction. Remember, from Paul’s body went handkerchiefs and aprons that cast out devils and healed the sick (Acts 19:12). Remember, Paul raised someone from the dead (Acts 20:9-11). Many were healed under Paul’s ministry. Did Paul ever get people healed by beseeching the Lord “that it might depart” as mentioned in 2 Cor 12:8? No, not once did Paul pray for someone’s healing (see Paul’s healing throughout the book of Acts). So it would probably be safe to say that Paul would not pray to God for healing if this was a sickness or disease. He knows how to obtain healing and that is by faith. Paul would not ask God to take something away that Jesus already took away on the cross (Matt 8:17; 1 Pet 2:24). By so doing, that would actually be a lack of faith.

Is it demonic oppression?

The words “messenger of Satan” can imply an angel of Satan was causing this problem for Paul. This may be true to some extent. It is not inconceivable that Satan would assign one of his evil spirits to stir up trouble for Paul. However, I do not believe it was a direct attack by the spirit on Paul’s body or mind. The reason is because Paul knows how to deal with evil spirits as he did so in the city of Philippi :

Act 16:16 – 18 And it came to pass, as we went to prayer, a certain damsel possessed with a spirit of divination met us, which brought her masters much gain by soothsaying: The same followed Paul and us, and cried, saying, These men are the servants of the most high God, which show unto us the way of salvation. And this did she many days. But Paul, being grieved, turned and said to the spirit, I command thee in the name of Jesus Christ to come out of her. And he came out the same hour.

If it was direct demonic oppression, Paul would certainly not be beseeching God that it would be removed. Paul knows the authority he has in Christ and would deal with it himself.

So What is Paul’s Thorn?

Paul has authority in Christ over sickness, disease, and evil spirits. What he does not have authority over are other people. Other people are Paul’s problem. I believe the word buffet will give us a clue as to the re of Paul’s thorn. Thayer’s says:

2) to maltreat, treat with violence and contumely

One instance of when buffet was used was leading to Jesus’ crucifixion:

Mat 26:67 Then did they spit in his face, and buffeted him; and others smote him with the palms of their hands,

It speaks of being beat by the hands of men blow after blow after blow. Buffeting never indicates a sickness or disease which is a constant problem, not a blow after blow type of affliction. It just so happens that the context of this chapter and even the previous chapter includes this thought. The answer to the question of “what is Paul’s thorn” is found in the elementary hermeneutics of context (read all of chapters 11 and 12 to see the full context):

2Co 12:10 Therefore I take pleasure in infirmities, in reproaches, in necessities, in persecutions , in distresses for Christ’s sake: for when I am weak, then am I strong.

It is the same thing Jesus suffered in the flesh which is persecution. All who live godly will suffer persecution and Paul certainly did live godly. Paul had many instances of persecution that we can read in the Bible:

Act 13:50 But the Jews stirred up the devout and honorable women, and the chief men of the city, and raised persecution against Paul and Barnabas, and expelled them out of their coasts.

Gal 5:11 And I, brethren, if I yet preach circumcision, why do I yet suffer persecution? then is the offense of the cross ceased.

2Ti 3:11, 12 Persecutions, afflictions, which came unto me at Antioch, at Iconium, at Lystra; what persecutions I endured: but out of them all the Lord delivered me. Yea, and all that will live godly in Christ Jesus shall suffer persecution.

Act 20:19 Serving the Lord with all humility of mind, and with many tears, and temptations, which befell me by the lying in wait of the Jews

What did God say to Paul’s plea?:

2Co 12:8 – 10 For this thing I besought the Lord thrice, that it might depart from me. And he said unto me, My grace is sufficient for thee: for my strength is made perfect in weakness. Most gladly therefore will I rather glory in my infirmities, that the power of Christ may rest upon me. Therefore I take pleasure in infirmities, in reproaches, in necessities, in persecutions, in distresses for Christ’s sake: for when I am weak, then am I strong.

When I first read this passage I thought God said, “No” to Paul’s request. But that is not what God said. He gave Paul the solution to the problem which is grace. Grace is God’s favor and ability to deal with a situation. God said how to get the grace and that was through humility. This is perfectly inline with Scriptures for James says the same thing:

Jam 4:6 But he giveth more grace. Wherefore he saith, God resisteth the proud, but giveth grace unto the humble.

When Paul humbled himself, he could receive the grace necessary to overcome beatings, stonings, and any other persecution. One of the hallmarks of Paul’s ministry was that of humility. I believe every time he had trouble in ministry, he would remember this situation mentioned in 2 Corinthians 12 and humble himself to receive the grace.

Paul’s thorn in the flesh was initiated by Satan to keep Paul from receiving revelation from God. God however used the situation to better Paul by teaching him to rely on God’s grace for victory. The thorn was not sickness or disease or demonic oppression. Paul knew how to deal with such things with the authority of the believer and he did so many times in his ministry. Paul would not need to pray to God if it were any of these things. Paul’s thorn in the flesh was persecution, mostly by the Jews. How could Paul continue to receive revelation if everywhere he went he was concerned about being followed and attacked with stones and beatings? Everywhere Paul went preaching the Gospel, the Jews would oppose him. They were influenced by the messenger of Satan which I believe was an evil spirit stirring up the Jew’s jealousy of Paul. Paul beseeched God that this would stop so that he could continue in his ministry without hindrance. God responded by telling him the secret of making it through any persecution: GRACE. God’s grace is all we need and whether we are persecuted or not (and we will be persecuted because the Bible said we would in 2 Tim. 3:12) the solution is to humble ourselves to receive God’s grace. That grace may be to deliver us from the persecution in some cases or it may be to deliver us through the persecution in other cases. God’s grace is sufficient!