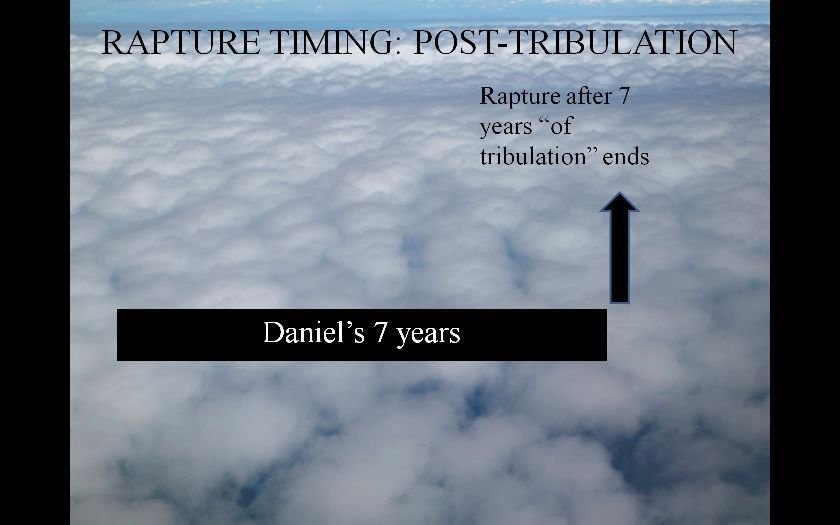 Part 6 – The Post-Trib Rapture of the Church

The Four Basic Beliefs About The Timing of The Rapture

There are four different beliefs about when the rapture will take place. They are: 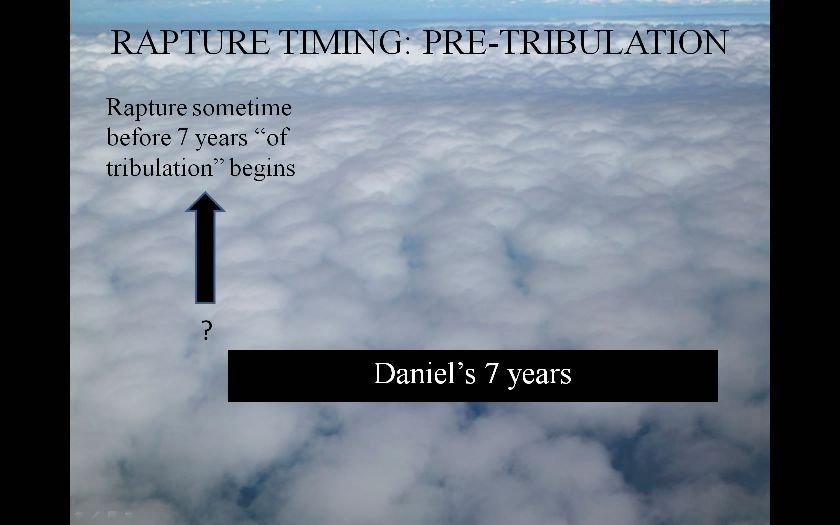 2) Mid-Tribulation – which believes that the rapture occurs EXACTLY HALF-WAY in the middle of the 7 years at the 3 ½ year mark. Also, instead of describing the Two Witnesses in Revelation as actual people, they are described as Israel and the Church; after their absence or death, their will be no more witnessing. During the first half of the Tribulation, the Church will experience the Antichrist’s wrath but then be raptured. The last half of the Tribulation will be God’s wrath on those remaining. 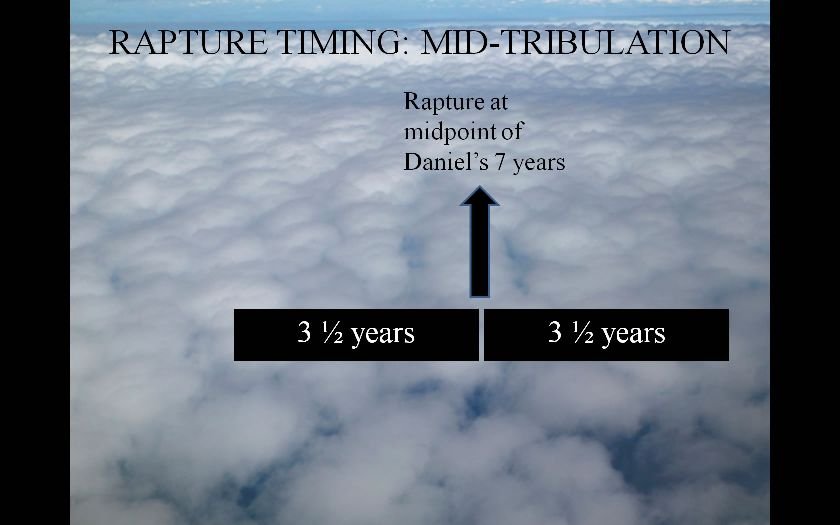 3) Post-Tribulation – says that the Church will endure “the entire seven years of tribulation.” The Rapture takes place at the same time as the Second Advent, the Judgment Seat of Christ, and the Marriage Supper of the Lamb which is AFTER the tribulation.

4) Pre-Wrath – the main tribulation is actually only the last half of Daniel’s 70th week = 3 ½ years. That 3 1/2 years is divided between the Antichrist’s wrath, which the Church will endure, and God’s wrath. So somewhere during the last 3 ½ years, before God’s wrath is poured out on mankind, the Church will leave in the Rapture (hence “Pre-Wrath” is talking about before God’s wrath). Exactly which day it occurs they do not know but they do believe it is at the Sixth Seal which has the great signs in the sun and the moon and a great earthquake that shakes the entire earth. 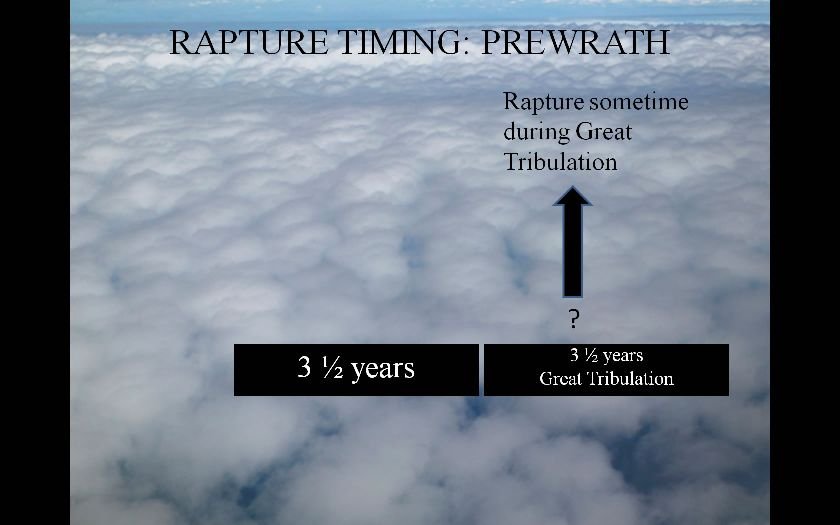 Each section below are the most famous rapture Scriptures that we will examine one at a time in context. The main Scripture is in the red and the supporting explanation and Scriptures are in the black below it.

1Th 4:13-18 KJV But I would not have you to be ignorant, brethren, concerning them which are asleep, that ye sorrow not, even as others which have no hope. (14) For if we believe that Jesus died and rose again, even so them also which sleep in Jesus will God bring with him. (15) For this we say unto you by the word of the Lord, that we which are alive and remain unto THE COMING OF THE LORD shall not prevent them which are asleep. (16) For the Lord himself shall descend from heaven with a shout, with the voice of the archangel, and with the trump of God: and the dead in Christ shall rise first: (17) Then we which are alive and remain shall be CAUGHT UP together with them in the clouds, to meet the Lord in the air: and so shall we ever be with the Lord. (18) Wherefore comfort one another with these words. 1Th 5:1-11 KJV But of the times and the seasons, brethren, ye have no need that I write unto you. (2) For yourselves know perfectly that THE DAY OF THE LORD so cometh as a thief in the night. (3) For when they shall say, Peace and safety; then sudden destruction cometh upon them, as travail upon a woman with child; and they shall not escape. (4) But ye, brethren, are not in darkness, that that day should overtake you as a thief. (5) Ye are all the children of light, and the children of the day: we are not of the night, nor of darkness. (6) Therefore let us not sleep, as do others; but let us watch and be sober. (7) For they that sleep sleep in the night; and they that be drunken are drunken in the night. (8) But let us, who are of the day, be sober, putting on the breastplate of faith and love; and for an helmet, the hope of salvation. (9) For God hath not appointed us to wrath , but to obtain salvation by our Lord Jesus Christ, (10) Who died for us, that, whether we wake or sleep, we should live together with him. (11) Wherefore comfort yourselves together , and edify one another, even as also ye do.

Almost all agree that chapter 4 verses 16-18 are clearly talking about the rapture of the Church when the Lord Jesus will come from Heaven and gather all of His saints from the earth. However, the Bible was not written in chapter and verse so ignore that a new chapter was started and just keep reading. In context, Paul speaks of the rapture, the coming, and the Day of the Lord together like they are one event! Just read it all together. The only thought he interjects on the subject is that, concerning the times and seasons, it will come as a thief in the night. He NEVER changes subjects! He NEVER divided this into two events.

The comfort is that we are not appointed to God’s wrath, NOT that we will avoid man’s persecution or the asteroid impact. That is truly comforting because God’s wrath far outweighs what the Antichrist will do in persecuting us or the asteroid consequences.

1 Thessalonians 4 and 5 teaches us that the rapture happens, THEN the wrath of God is poured out on the sinners that remain. The two parts, the rapture and the Day of the Lord, are paired together here and are inseparable in this passage. The rapture seems to happen so fast that people do not have time to repent. Then many are destroyed which is why He warns them that it will come suddenly…too suddenly to react.

Notice that the conditions of the world are the exact same as those mentioned at the sixth seal.:

When he opened the sixth seal, I looked, and behold, there was a great earthquake, and the sun became black as sackcloth, the full moon became like blood, (Rev 6:12 ESV)

That means the conditions of the sun darkened and moon to blood are set BEFORE the Day of the Lord at the Sixth Seal. The Sixth Seal, all agree, does not happen at the beginning of the seven years; it happens some time into the Great Tribulation. Therefore, the Rapture/Day of the Lord happens during the last half of Daniel’s seventieth week but we do not know exactly when. Christians will have to endure the persecution of the Antichrist. Don’t be deceived – be prepared!

So what does the Scriptures teach us about the Day of The Lord? The Day of the Lord does NOT IN ANY POSSIBLE WAY start at the beginning of the 7 year “tribulation” period. The Day of the Lord starts with Him coming, first rapturing His people, then annihilating the heathen immediately and completely around Jerusalem. This happens after the final 7 years. It ends when He sets down on the Mount of Olives.

The Scriptures in 1 Thessalonians 4 and 5, shows that the rapture and the Day of the Lord are the same event. I’ll also be examining all the other major rapture Scriptures below.

The question is when is the rapture? So many ideas exist on that question that it may be easier to answer the question, “When is the Day of the Lord?” When we find the answer to that, we’ll know that the rapture happened right before Jesus pours out His wrath in the Day of the Lord according to the Scriptures we just read. For God has not appointed His people to wrath:

1Th 5:9 ESV For God has not destined us for wrath, but to obtain salvation through our Lord Jesus Christ,

However, the Scriptures are very clear we cannot know the day or hour but we should be close to understanding the season it occurs.

Cont’d on the next page…