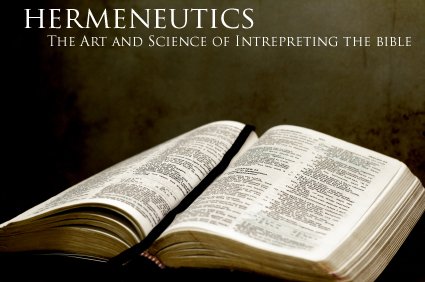 If you have done any outside research concerning Bible subjects, you will find that some people are right on track in their Bible interpretation while others are not. Because of improper Bible interpretation we have anything from simple misunderstandings about certain Bible doctrines to cultic confusion. I want to make a resource available to you to help you in your personal Bible study. I suggest printing these things out and using them as a guide whenever you study your Bible. Especially take a look at them if you come up with some new doctrine that no one has ever “received from God” but now you have. Sometimes when people are seeking fresh revelation from God, their zeal can lead them into the temptation to make the Bible agree with their beliefs instead of allowing the Bible create their believes. We must put the Word first and set aside our own religious teachings or prejudices. This is not always easy but if we are truly seeking the Truth above what we want to hear, then God will reveal His Word and we will rejoice in the things of God and stay on the path of Truth.

2Ti 3:16, 17 All Scripture is given by inspiration of God, and is profitable for doctrine, for reproof, for correction, for instruction in righteousness: That the man of God may be perfect, thoroughly furnished unto all good works.

2Pe 1:20, 21Knowing this first, that no prophecy of the Scripture is of any private interpretation. For the prophecy came not in old time by the will of man: but holy men of God spake as they were moved by the Holy Ghost.

2Ti 2:15 Study to show thyself approved unto God, a workman that needeth not to be ashamed, rightly dividing the word of truth.

The Bible is God speaking to us. It was written exactly word for word the way God intended and there are no mistakes. All Scriptures are God-breathed and there is no private interpretation of a Scripture. It means only what God intended for it to mean and does not mean something different because you interpreted it different than another. Truth is not relative, it is absolute!

Questions to Ask Yourself About the Interpretation of a Bible Passage

RULE #1: Context. Context. Context. A Scripture does not ever stand alone. All Scriptures must be read within the context of the passage they are found, keeping the whole Bible in mind. This is the most violated rule and the most important one. There are six areas of context to consider:

RULE #3: Interpret the Bible Literally. Unless a passage is obviously symbolic, interpret every passage literally. God meant what He said exactly the way He said it. If there is symbolism, there will often be an accompanied interpretation within the same passage. Truth is not subjective. Men have made most of the Bible symbolic, thus, they can interpret the meanings of the symbols to say whatever they want. This is a major cause of cults.

RULE #4: History and Grammar. Find the original intention of the author when he wrote the passage. Do not read into it something other than what the author was saying at the time he wrote it. Sometimes we read the Bible from a 21st century mind-set but we can go astray if we are not careful. However, with this rule we must keep in mind that God is the main Author and the human writer may not have understood the all things God inspired him to write.

RULE #5: First Mention. The first place a subject is mentioned in the Bible is a key to understanding it.

RULE #6: Progressive Revelation. Keep in mind that God has revealed Himself more with the passage of time. Therefore, the farther back you go historically in the Bible, the less light the writers had. For example they did not know exactly who the messiah was in the Old Testament or the particulars of the New Covenant. The writers of the New Testament had the greatest insight into who God is and what His plan is.

RULE #7: Christ is the Center. Jesus Christ is the main focus of the entire Bible. All interpretation must be in the light of Him and His purposes.

RULE #8: Proper Emphasis. We must realize the emphasis God is making at a particular time. Much error has occurred because men added more emphasis to a passage than God intended. Any Truth can become a lie by taking it to an extreme.

I only have eight rules here but there are more. I only wanted to include some of the basics and the ones that help me the most. The above principle are not to stand alone but are to be used together to come to the Truth. They are inter-dependent. No rule should be taken to an extreme.

*Much of the above content was compiled from notes I gathered from lectures and handouts by the Reverend Marvin Yoder.

The Gaps Which Hinder Our Bible Interpretation

Keep in mind these gaps as you read and study your Bible. It will help in your interpretation of the passages.

Historical Gap: The Bible was written before our time, i.e. we were not there.

Cultural Gap: The Bible speaks of different cultures of which we are not a part.

Language Gap: The Bible was written in a different language than our own.

Geographical Gap: The location is different than where we are.

Biological Gap: The thinking of a particular race of people is different than our own.

The good news is there are many books out there to help us overcome each gap. With the help of concordances, lexicons, dictionaries, atlases, history books, cultural books, and many other books we can learn to overcome and see things the way the writers originally intended them.

Other Things to Help in Proper Bible Interpretation

Mat 18:16 But if he will not hear thee, then take with thee one or two more, that in the mouth of two or three witnesses every word may be established.

2Co 13:1 This is the third time I am coming to you. In the mouth of two or three witnesses shall every word be established.

1Ti 5:19 Against an elder receive not an accusation, but before two or three witnesses.

The best teacher is the Holy Ghost.

Even if men are saying something that is not true, you can still learn something by listening to the Holy Spirit.

1Co 2:13 Which things also we speak, not in the words which man’s wisdom teacheth, but which the Holy Ghost teacheth; comparing spiritual things with spiritual.

The New Testament is the best place to receive revelation for it is the covenant by which we are currently under.

Heb 7:22 By so much was Jesus made a surety of a better testament.

Heb 8:6 But now hath he obtained a more excellent ministry, by how much also he is the mediator of a better covenant, which was established upon better promises.

Spend the majority of your time in the Epistles of the New Testament.

These are letters written to the Church. The Gospels, Matthew, Mark, Luke, and John, tell the story of Jesus but we learn virtually nothing about why He died on that cross and what it means to us. Also, when Jesus spoke, He was talking to the Jews, not to the Church. Much of what He said we can certainly use and should study but the best instruction comes from the letters written directly to the born-again believer by the Holy Ghost which are the epistles.

Act 2:42 And they continued steadfastly in the apostles’ doctrine and fellowship, and in breaking of bread, and in prayers.

Listen to those who are over you in spiritual authority and your peers.

If they are saying you are going down a wrong doctrinal path, do not preach your “new revelation”. Study, pray, and wait it out for some years.

Mat 18:15 – 17 Moreover if thy brother shall trespass against thee, go and tell him his fault between thee and him alone: if he shall hear thee, thou hast gained thy brother. But if he will not hear thee, then take with thee one or two more, that in the mouth of two or three witnesses every word may be established. And if he shall neglect to hear them, tell it unto the church: but if he neglect to hear the church, let him be unto thee as a heathen man and a publican.

If you have some new revelation, do not preach it immediately.

Study the Word and make sure you are correct. Apply it your life over a period of many years. Many times, the things we think we have received from God turn out to just be from our own thinking and should be discarded. Some of the best advice I have ever heard was “do not preach a new revelation unless you have been in full-time ministry a minimum of 25 years.” If it is true, then your revelation will stand the test of time.

Eph 1:17, 18 That the God of our Lord Jesus Christ, the Father of glory, may give unto you the spirit of wisdom and revelation in the knowledge of him: The eyes of your understanding being enlightened

1Co 2:4 – 7, 10 -13 And my speech and my preaching was not with enticing words of man’s wisdom, but in demonstration of the Spirit and of power: That your faith should not stand in the wisdom of men, but in the power of God. Howbeit we speak wisdom among them that are perfect: yet not the wisdom of this world, nor of the princes of this world, that come to naught: But we speak the wisdom of God in a mystery, even the hidden wisdom, which God ordained before the world unto our glory… But God hath revealed them unto us by his Spirit: for the Spirit searcheth all things, yea, the deep things of God. For what man knoweth the things of a man, save the spirit of man which is in him? even so the things of God knoweth no man, but the Spirit of God. Now we have received, not the spirit of the world, but the Spirit which is of God; that we might know the things that are freely given to us of God. Which things also we speak, not in the words which man’s wisdom teacheth, but which the Holy Ghost teacheth; comparing spiritual things with spiritual.

Learn to separate the principle from the example.

Every teaching in the Bible is either a principle or an example based upon a principle. However, many people have taken examples given in the Bible and made the example a hard-fast rule when they should be looking at the bigger picture of the principle the writer was trying to convey. For example, looking at the passage, “Rom 14:23 … for whatsoever is not of faith is sin.” Some have made-up a rule that if you are not believing God for something you are in sin based on this passage. However, if we examine the context, we see that this phrase is an example of a bigger picture. The principle Paul was trying to make is that we need to have faith in the revelation we have received thus far and act on it; do not be afraid to do what your heart is telling you to do.

If you have found some deep revelation in a passage that says the opposite of what the passage simply states on the surface, be warned.

You could be heading down the path of false doctrine. Do not read into a Scripture more than is there.

Everything is not a type so do not try to make every passage into one.

Too many people are trying to find a new deep revelation that no one has. To do so they will often make every passage into a type so that they can “reveal” a fresh revelation about the passage. Don’t force a type onto every passage of Scripture.