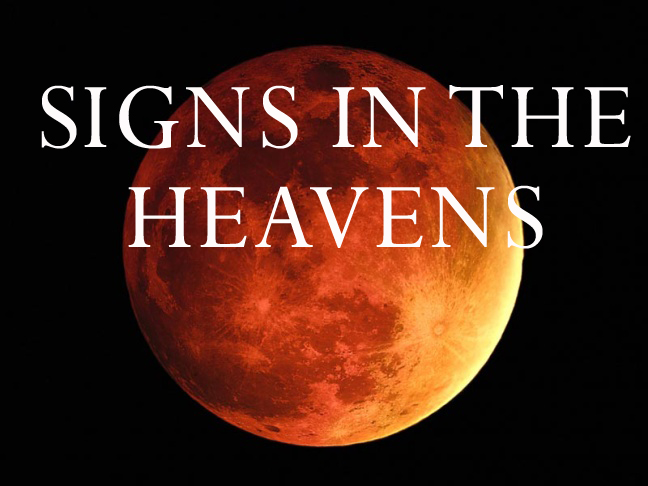 Signs in the Heavens – Blood Moon

For fear of getting into astrology, some Christians have ignored or even disdained the blood moons. Is considering the “signs in the heavens” ungodly or unbiblical?

Genesis 1:14 And God said, Let there be lights in the firmament of the heaven to divide the day from the night; and let them be for signs, and for seasons, and for days, and years:

The Bible says here that lights in the heavens were specifically to be used as signs. These lights include the sun, moon, and stars as the the passage goes on to explain in verse 16:

A sign is a signal – something to give notice of what is ahead. So God gave us the sun, moon, and stars to give signals of what is ahead. Of course, man is a depraved creature who has fallen into worshiping the hosts of heaven. He tends toward bowing down to the creation rather than bowing down to the Creator. So I understand the apprehension in looking at the sun, moon, and stars as signs for Christians. However, the Bible clearly says they are to be used as signs. What does that mean?

Astrology is the devilish practice of looking at the sun, moon, and stars to predict things on earth. Men look at the zodiac and horoscopes to know what is to happen in their personal lives. It is a perversion of what God has ordained as the signs of the sun, moon, and stars. They worship the creation rather than the Creator. We are told never to worship the hosts of heaven:

Deuteronomy 17:2-3 If there be found among you, within any of thy gates which the LORD thy God giveth thee, man or woman, that hath wrought wickedness in the sight of the LORD thy God, in transgressing his covenant, (3) And hath gone and served other gods, and worshipped them, either the sun, or moon, or any of the host of heaven, which I have not commanded;

Practicing astrology and worshiping the hosts of heaven was punishable by stoning to death in the Old Testament.

Ancient Babylon built a tower to reach unto the heavens so that man could make a name for himself. Such towers were well-known to be ziggurats, which were used to worship the hosts of heaven. Likely the tower of Babel was based on astrology and the zodiac to worship the heavens. Of course we know God destroyed it. God abhors the worship of creation rather than the Creator.

It is evident we are not to worship the hosts of heaven, God’s creation. However, the Bible does say the sun, moon, and stars can be used for signs. The pagans certainly try to use the use the hosts of heaven for signs and to obtain secret knowledge. But just because they do, does that mean it is forbidden for God’s people to see if there is a signal through the sun, moon, and stars? I do not believe so because the Bible clearly says they are to be used a signs. We have evidence of such a use in the Bible. If it were not for the sign of the star, the magi would not have found the Savior:

Matthew 2:1-2 Now when Jesus was born in Bethlehem of Judaea in the days of Herod the king, behold, there came wise men from the east to Jerusalem, (2) Saying, Where is he that is born King of the Jews? for we have seen his star in the east, and are come to worship him.

Matthew 2:9-11 When they had heard the king, they departed; and, lo, the star, which they saw in the east, went before them, till it came and stood over where the young child was. (10) When they saw the star, they rejoiced with exceeding great joy. (11) And when they were come into the house, they saw the young child with Mary his mother, and fell down, and worshipped him: and when they had opened their treasures, they presented unto him gifts; gold, and frankincense, and myrrh.

So the coming of the Messiah was foretold by a star – a signal in the heavens. It directed them to something great happening in the earth. When they diligently studied the signs, they were able to able to discern this star would lead them to the Messiah. Notice, they never once worshiped the star; they fell down and worshiped the Creator of the star – Jesus.

The Bible talks about the constellations:

Job 38:31-33 Canst thou bind the sweet influences of Pleiades, or loose the bands of Orion? (32) Canst thou bring forth Mazzaroth in his season? or canst thou guide Arcturus with his sons? (33) Knowest thou the ordinances of heaven? canst thou set the dominion thereof in the earth?

The Bible says that other signs will occur in the heavens to signal to us a message from God. When the Lord Jesus returns He says this concerning heavenly signs:

Mat 24:29, 30 KJV Immediately after the tribulation of those days shall the sun be darkened, and the moon shall not give her light, and the stars shall fall from heaven, and the powers of the heavens shall be shaken: And then shall appear the sign of the Son of man in heaven…

This is the same event as the sixth seal:

Revelation 6:12-14 KJV And I beheld when he had opened the sixth seal, and, lo, there was a great earthquake; and the sun became black as sackcloth of hair, and the moon became as blood; (13) And the stars of heaven fell unto the earth, even as a fig tree casteth her untimely figs, when she is shaken of a mighty wind. (14) And the heaven departed as a scroll when it is rolled together; and every mountain and island were moved out of their places.

It is evident God wants us to see the sun, moon, and stars as signs. We have heard a lot about the blood moons in the past few years. I want to be clear that the blood moon of the Bible we read in the prophecy above is not in any way related to the four blood moons that occurred April 2014 through September 2015. The blood moon mentioned in Revelation 6 happens at the end of the seven final years. We are not in the seven final years or the Great Tribulation; therefore, it impossible for the four blood moons to have anything to do with the coming of Jesus. To be in the final seven years we would have had to have seen the fulfillment of the prophecies concerning the coming of the antichrist, the mark of the beast, and the building of the third temple but these did not occur.

The four blood moons, however, are spectacular in that they occur exactly on four Jewish feast days within a two year span. The word “feast” in Hebrew really means appointed times with God. Blood moons traditionally meant bad omens for the nation of Israel. So we can expect something bad is going to happen to Israel. But in the end, God always turned the tide and blessed Israel. For example, the Spanish Inquisition was around the time of a set of four blood moons on Jewish feast days. Jews were persecuted and killed for not converting to Catholicism. But in the end, many were eventually transported to a new country, America, to be given a new home. There are almost as many Jews in American as in Israel. Another four blood moons on Jewish feast days occurred after WWII where the Jews were slaughtered in the holocaust. Yet God turned it around and gave them a new nation – the land of Israel. Another four blood moons on feast days was the Six Day war when several Muslim nations attacked Israel to take their new homeland. God turned it around and they gained the capital city of Jerusalem. So we can possibly expect persecution and the slaughtering of Jews to occur, yet God will turn it around to bless the Jews.