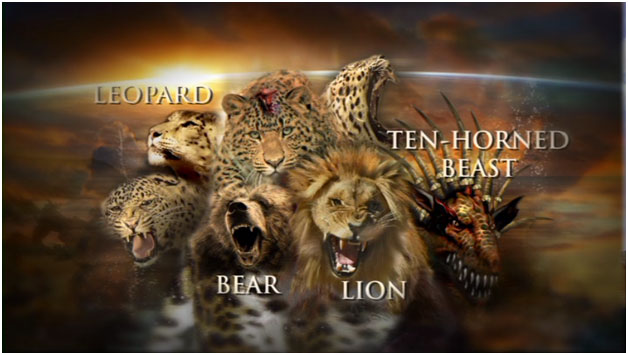 The Vision of Revelation 12 – 14; The Rise of A Beast – World Government 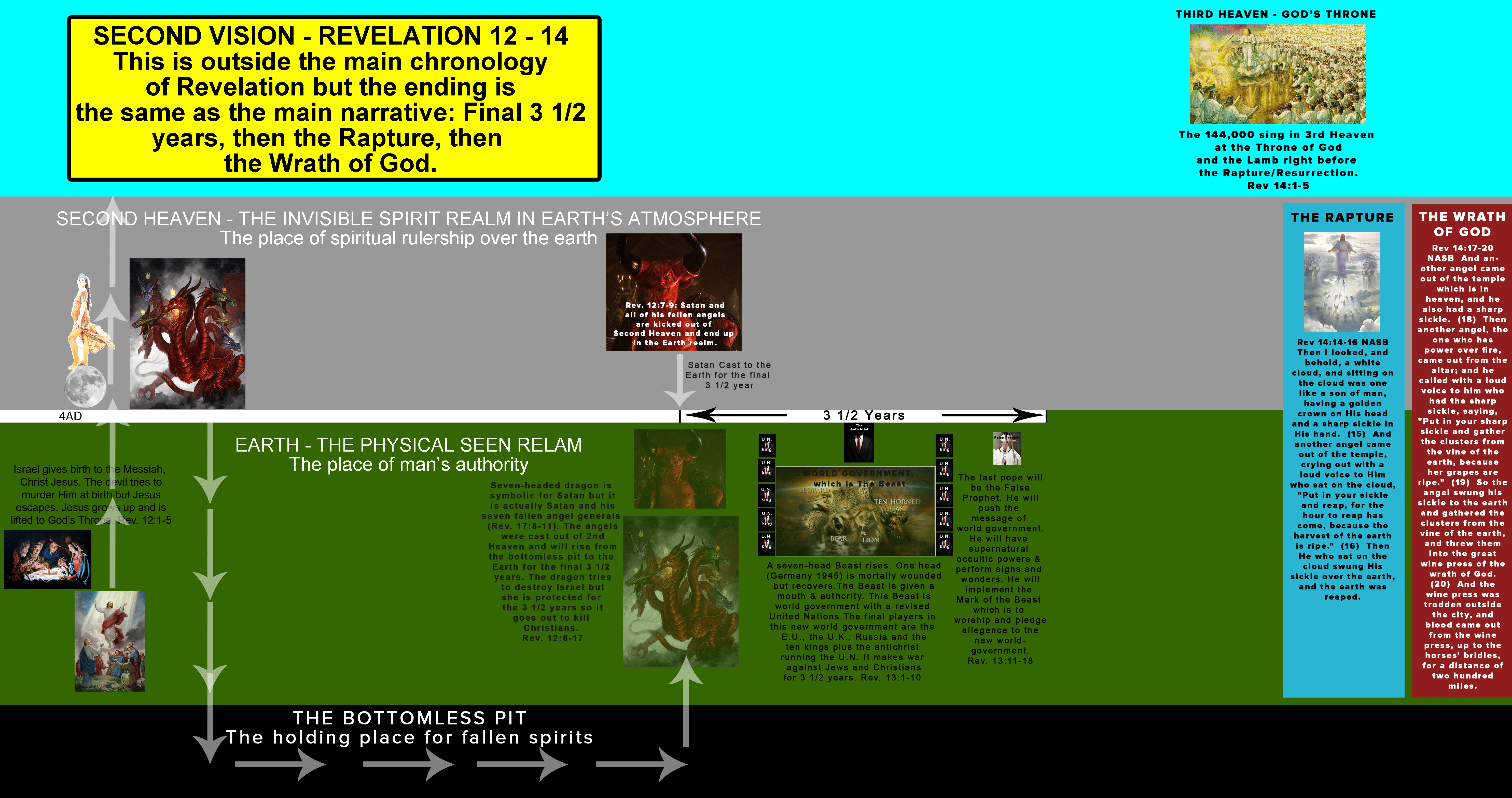 Revelation chapters 12 -14 is a highly symbolic vision spanning the time of Israel giving birth to the Christ up until the wrath of God is poured out.  These chapters are symbolic unlike most of the main narrative of Revelation that describes the Seven Seals, the Seven Trumpets, and the Seven Vials.

Who Is The Whore and the Dragon?

Rev 12:1  A great sign appeared in heaven: a woman clothed with the sun, and the moon under her feet, and on her head a crown of twelve stars;

Rev 12:2  and she was with child; and she cried out, being in labor and in pain to give birth.
Rev 12:3  Then another sign appeared in heaven: and behold, a great red dragon having seven heads and ten horns, and on his heads were seven diadems.
Rev 12:4  And his tail swept away a third of the stars of heaven and threw them to the earth. And the dragon stood before the woman who was about to give birth, so that when she gave birth he might devour her child.

Rev 12:5  And she gave birth to a son, a male child, who is to rule all the nations with a rod of iron; and her child was caught up to God and to His throne.

Rev 12:6  Then the woman fled into the wilderness where she had a place prepared by God, so that there she would be nourished for one thousand two hundred and sixty days.

Satan and His Angels Thrown Down to Earth From Second Heaven

Rev 12:8  and they were not strong enough, and there was no longer a place found for them in heaven.

Rev 12:9  And the great dragon was thrown down, the serpent of old who is called the devil and Satan, who deceives the whole world; he was thrown down to the earth, and his angels were thrown down with him.
Rev 12:10  Then I heard a loud voice in heaven, saying, “Now the salvation, and the power, and the kingdom of our God and the authority of His Christ have come, for the accuser of our brethren has been thrown down, he who accuses them before our God day and night.

It is apparent that from Second Heaven, the place of authority over the earth, Satan used to have a voice to accuse the brethren before God’s Throne.

Rev 12:11  “And they overcame him because of the blood of the Lamb and because of the word of their testimony, and they did not love their life even when faced with death.
Rev 12:12  “For this reason, rejoice, O heavens and you who dwell in them. Woe to the earth and the sea, because the devil has come down to you, having great wrath, knowing that he has only a short time.”

Rev 12:13  And when the dragon saw that he was thrown down to the earth, he persecuted the woman who gave birth to the male child.
Rev 12:14  But the two wings of the great eagle were given to the woman, so that she could fly into the wilderness to her place, where she was nourished for a time and times and half a time, from the presence of the serpent.

Rev 12:15  And the serpent poured water like a river out of his mouth after the woman, so that he might cause her to be swept away with the flood.

Rev 12:16  But the earth helped the woman, and the earth opened its mouth and drank up the river which the dragon poured out of his mouth.
Rev 12:17  So the dragon was enraged with the woman, and went off to make war with the rest of her children, who keep the commandments of God and hold to the testimony of Jesus.

Who Is The First Beast? – World Government Run By The Antichrist and Ten Kings/Rulers

Rev 13:1  And the dragon stood on the sand of the seashore. Then I saw a beast coming up out of the sea, having ten horns and seven heads, and on his horns were ten diadems, and on his heads were blasphemous names.

Rev 13:2  And the beast which I saw was like a leopard, and his feet were like those of a bear, and his mouth like the mouth of a lion. And the dragon gave him his power and his throne and great authority.

Rev 13:3  I saw one of his heads as if it had been slain, and his fatal wound was healed. And the whole earth was amazed and followed after the beast;

Rev 13:6  And he opened his mouth in blasphemies against God, to blaspheme His name and His tabernacle, that is, those who dwell in heaven.
Rev 13:7  It was also given to him to make war with the saints and to overcome them, and authority over every tribe and people and tongue and nation was given to him.

Rev 13:8  All who dwell on the earth will worship him, everyone whose name has not been written from the foundation of the world in the book of life of the Lamb who has been slain.
Rev 13:9  If anyone has an ear, let him hear.

Rev 13:10  If anyone is destined for captivity, to captivity he goes; if anyone kills with the sword, with the sword he must be killed. Here is the perseverance and the faith of the saints.

Who Is The Second Beast?

Rev 13:11  Then I saw another beast coming up out of the earth; and he had two horns like a lamb and he spoke as a dragon.
Rev 13:12  He exercises all the authority of the first beast in his presence. And he makes the earth and those who dwell in it to worship the first beast, whose fatal wound was healed.

Rev 13:13  He performs great signs, so that he even makes fire come down out of heaven to the earth in the presence of men.

Rev 13:16  And he causes all, the small and the great, and the rich and the poor, and the free men and the slaves, to be given a mark on their right hand or on their forehead,

Rev 13:17  and he provides that no one will be able to buy or to sell, except the one who has the mark, either the name of the beast or the number of his name.
Rev 13:18  Here is wisdom. Let him who has understanding calculate the number of the beast, for the number is that of a man; and his number is six hundred and sixty-six.

Rev 14:1  Then I looked, and behold, the Lamb was standing on Mount Zion, and with Him one hundred and forty-four thousand, having His name and the name of His Father written on their foreheads.

Rev 14:2  And I heard a voice from heaven, like the sound of many waters and like the sound of loud thunder, and the voice which I heard was like the sound of harpists playing on their harps.
Rev 14:3  And they *sang a new song before the throne and before the four living creatures and the elders; and no one could learn the song except the one hundred and forty-four thousand who had been purchased from the earth.
Rev 14:4  These are the ones who have not been defiled with women, for they have kept themselves chaste. These are the ones who follow the Lamb wherever He goes. These have been purchased from among men as first fruits to God and to the Lamb.

Rev 14:5  And no lie was found in their mouth; they are blameless.

The Messages of the Three Angels

Rev 14:6  And I saw another angel flying in midheaven, having an eternal gospel to preach to those who live on the earth, and to every nation and tribe and tongue and people;

Rev 14:7  and he said with a loud voice, “Fear God, and give Him glory, because the hour of His judgment has come; worship Him who made the heaven and the earth and sea and springs of waters.”
Rev 14:8  And another angel, a second one, followed, saying, “Fallen, fallen is Babylon the great, she who has made all the nations drink of the wine of the passion of her immorality.”

Rev 14:9  Then another angel, a third one, followed them, saying with a loud voice, “If anyone worships the beast and his image, and receives a mark on his forehead or on his hand,
Rev 14:10  he also will drink of the wine of the wrath of God, which is mixed in full strength in the cup of His anger; and he will be tormented with fire and brimstone in the presence of the holy angels and in the presence of the Lamb.
Rev 14:11  “And the smoke of their torment goes up forever and ever; they have no rest day and night, those who worship the beast and his image, and whoever receives the mark of his name.”
Rev 14:12  Here is the perseverance of the saints who keep the commandments of God and their faith in Jesus.

Rev 14:13  And I heard a voice from heaven, saying, “Write, ‘Blessed are the dead who die in the Lord from now on!'” “Yes,” says the Spirit, “so that they may rest from their labors, for their deeds follow with them.”

What Is The Harvest of the Earth?

Rev 14:14  Then I looked, and behold, a white cloud, and sitting on the cloud was one like a son of man, having a golden crown on His head and a sharp sickle in His hand.

Rev 14:15  And another angel came out of the temple, crying out with a loud voice to Him who sat on the cloud, “Put in your sickle and reap, for the hour to reap has come, because the harvest of the earth is ripe.”

Rev 14:16  Then He who sat on the cloud swung His sickle over the earth, and the earth was reaped.
Rev 14:17  And another angel came out of the temple which is in heaven, and he also had a sharp sickle.
Rev 14:18  Then another angel, the one who has power over fire, came out from the altar; and he called with a loud voice to him who had the sharp sickle, saying, “Put in your sharp sickle and gather the clusters from the vine of the earth, because her grapes are ripe.”

Rev 14:19  So the angel swung his sickle to the earth and gathered the clusters from the vine of the earth, and threw them into the great wine press of the wrath of God.
Rev 14:20  And the wine press was trodden outside the city, and blood came out from the wine press, up to the horses’ bridles, for a distance of two hundred miles.

One thought on “The Vision of Revelation 12 – 14; The Rise of A Beast – World Government”