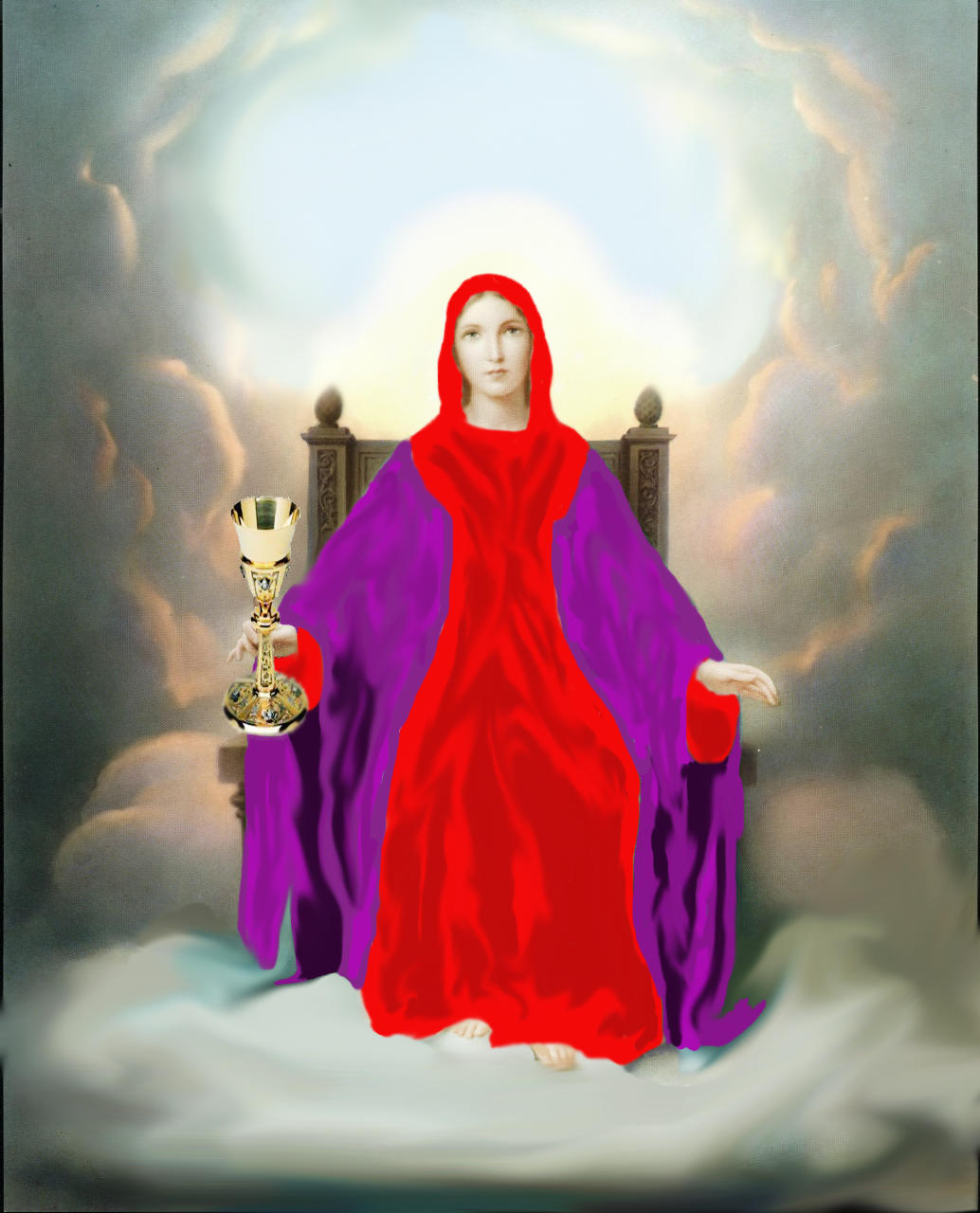 The Vision of Revelation 17 – 19; The Fall of the Whore of Babylon

Revelation chapters 17 -19 is a highly symbolic vision spanning the time of  1600 years before Jesus when false religion continued its reign over the earth. False religion is the Whore of Babylon who will reign until the last days. But she will be destroyed by the King of Kings and Lord of Lords.

Who Is The Great Whore and the Beast?

Rev 17:1  Then one of the seven angels who had the seven bowls came and spoke with me, saying, “Come here, I will show you the judgment of the great harlot who sits on many waters,

Rev 17:2  with whom the kings of the earth committed acts of immorality, and those who dwell on the earth were made drunk with the wine of her immorality.”

Rev 17:3  And he carried me away in the Spirit into a wilderness; and I saw a woman sitting on a scarlet beast, full of blasphemous names, having seven heads and ten horns.
Rev 17:4  The woman was clothed in purple and scarlet, and adorned with gold and precious stones and pearls, having in her hand a gold cup full of abominations and of the unclean things of her immorality,

Rev 17:5  and on her forehead a name was written, a mystery, “BABYLON THE GREAT, THE MOTHER OF HARLOTS AND OF THE ABOMINATIONS OF THE EARTH.”

Rev 17:7  And the angel said to me, “Why do you wonder? I will tell you the mystery of the woman and of the beast that carries her, which has the seven heads and the ten horns.
Rev 17:8  “The beast that you saw was, and is not, and is about to come up out of the abyss and go to destruction. And those who dwell on the earth, whose name has not been written in the book of life from the foundation of the world, will wonder when they see the beast, that he was and is not and will come.

Rev 17:9  “Here is the mind which has wisdom. The seven heads are seven mountains on which the woman sits,

Rev 17:10  and they are seven kings; five have fallen, one is, the other has not yet come; and when he comes, he must remain a little while.

Rev 17:11  “The beast which was and is not, is himself also an eighth and is one of the seven, and he goes to destruction.

Rev 17:12  “The ten horns which you saw are ten kings who have not yet received a kingdom, but they receive authority as kings with the beast for one hour.

Rev 17:13  “These have one purpose, and they give their power and authority to the beast.

Rev 17:14  “These will wage war against the Lamb, and the Lamb will overcome them, because He is Lord of lords and King of kings, and those who are with Him are the called and chosen and faithful.”

Rev 17:15  And he *said to me, “The waters which you saw where the harlot sits, are peoples and multitudes and nations and tongues.
Rev 17:16  “And the ten horns which you saw, and the beast, these will hate the harlot and will make her desolate and naked, and will eat her flesh and will burn her up with fire.

Rev 17:17  “For God has put it in their hearts to execute His purpose by having a common purpose, and by giving their kingdom to the beast, until the words of God will be fulfilled.

When Is The Fall of Babylon?

Rev 18:4  I heard another voice from heaven, saying, “Come out of her, my people, so that you will not participate in her sins and receive of her plagues;

Rev 18:5  for her sins have piled up as high as heaven, and God has remembered her iniquities.
Rev 18:6  “Pay her back even as she has paid, and give back to her double according to her deeds; in the cup which she has mixed, mix twice as much for her.
Rev 18:7  “To the degree that she glorified herself and lived sensuously, to the same degree give her torment and mourning; for she says in her heart, ‘I SIT as A QUEEN AND I AM NOT A WIDOW, and will never see mourning.’

Rev 18:8  “For this reason in one day her plagues will come, pestilence and mourning and famine, and she will be burned up with fire; for the Lord God who judges her is strong.

Rev 18:9  “And the kings of the earth, who committed acts of immorality and lived sensuously with her, will weep and lament over her when they see the smoke of her burning,

Rev 18:10  standing at a distance because of the fear of her torment, saying, ‘Woe, woe, the great city, Babylon, the strong city! For in one hour your judgment has come.’
Rev 18:11  “And the merchants of the earth weep and mourn over her, because no one buys their cargoes any more—
Rev 18:12  cargoes of gold and silver and precious stones and pearls and fine linen and purple and silk and scarlet, and every kind of citron wood and every article of ivory and every article made from very costly wood and bronze and iron and marble,
Rev 18:13  and cinnamon and spice and incense and perfume and frankincense and wine and olive oil and fine flour and wheat and cattle and sheep, and cargoes of horses and chariots and slaves and human lives.
Rev 18:14  “The fruit you long for has gone from you, and all things that were luxurious and splendid have passed away from you and men will no longer find them.
Rev 18:15  “The merchants of these things, who became rich from her, will stand at a distance because of the fear of her torment, weeping and mourning,
Rev 18:16  saying, ‘Woe, woe, the great city, she who was clothed in fine linen and purple and scarlet, and adorned with gold and precious stones and pearls;
Rev 18:17  for in one hour such great wealth has been laid waste!’ And every shipmaster and every passenger and sailor, and as many as make their living by the sea, stood at a distance,
Rev 18:18  and were crying out as they saw the smoke of her burning, saying, ‘What city is like the great city?’
Rev 18:19  “And they threw dust on their heads and were crying out, weeping and mourning, saying, ‘Woe, woe, the great city, in which all who had ships at sea became rich by her wealth, for in one hour she has been laid waste!’
Rev 18:20  “Rejoice over her, O heaven, and you saints and apostles and prophets, because God has pronounced judgment for you against her.”

Rev 19:1  After these things I heard something like a loud voice of a great multitude in heaven, saying, “Hallelujah! Salvation and glory and power belong to our God;

Rev 19:2  BECAUSE HIS JUDGMENTS ARE TRUE AND RIGHTEOUS; for He has judged the great harlot who was corrupting the earth with her immorality, and HE HAS AVENGED THE BLOOD OF HIS BOND-SERVANTS ON HER.”
Rev 19:3  And a second time they said, “Hallelujah! HER SMOKE RISES UP FOREVER AND EVER.”
Rev 19:4  And the twenty-four elders and the four living creatures fell down and worshiped God who sits on the throne saying, “Amen. Hallelujah!”

Rev 19:5  And a voice came from the throne, saying, “Give praise to our God, all you His bond-servants, you who fear Him, the small and the great.”

When Is The Marriage Supper of the Lamb?

Rev 19:6  Then I heard something like the voice of a great multitude and like the sound of many waters and like the sound of mighty peals of thunder, saying, “Hallelujah! For the Lord our God, the Almighty, reigns.
Rev 19:7  “Let us rejoice and be glad and give the glory to Him, for the marriage of the Lamb has come and His bride has made herself ready.”

Rev 19:8  It was given to her to clothe herself in fine linen, bright and clean; for the fine linen is the righteous acts of the saints.

When Does Jesus Comes on a White Horse To Pour Out God’s Wrath?

Rev 19:11  And I saw heaven opened, and behold, a white horse, and He who sat on it is called Faithful and True, and in righteousness He judges and wages war.

Rev 19:12  His eyes are a flame of fire, and on His head are many diadems; and He has a name written on Him which no one knows except Himself.
Rev 19:13  He is clothed with a robe dipped in blood, and His name is called The Word of God.

Rev 19:14  And the armies which are in heaven, clothed in fine linen, white and clean, were following Him on white horses.

Rev 19:15  From His mouth comes a sharp sword, so that with it He may strike down the nations, and He will rule them with a rod of iron; and He treads the wine press of the fierce wrath of God, the Almighty.

Rev 19:16  And on His robe and on His thigh He has a name written, “KING OF KINGS, AND LORD OF LORDS.”
Rev 19:17  Then I saw an angel standing in the sun, and he cried out with a loud voice, saying to all the birds which fly in midheaven, “Come, assemble for the great supper of God,
Rev 19:18  so that you may eat the flesh of kings and the flesh of commanders and the flesh of mighty men and the flesh of horses and of those who sit on them and the flesh of all men, both free men and slaves, and small and great.”

Rev 19:19  And I saw the beast and the kings of the earth and their armies assembled to make war against Him who sat on the horse and against His army.

Rev 19:20  And the beast was seized, and with him the false prophet who performed the signs in his presence, by which he deceived those who had received the mark of the beast and those who worshiped his image; these two were thrown alive into the lake of fire which burns with brimstone.

Rev 19:21  And the rest were killed with the sword which came from the mouth of Him who sat on the horse, and all the birds were filled with their flesh.