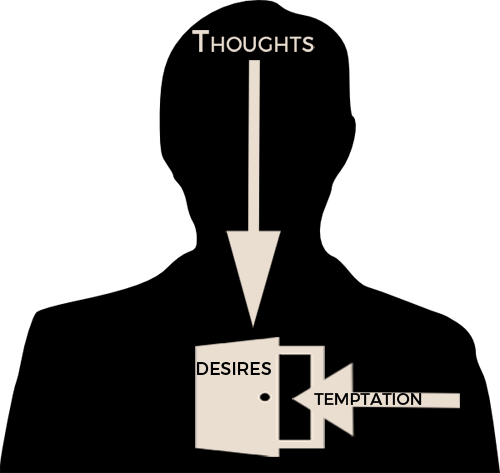 The image above illustrates that what we think about becomes our desires. Our desires are what opens the door to temptation.

Christians often find themselves in a spiral of sin – they sin, they feel bad, they try to stop, then they do it again. Frustration rises. They attempt again and again to overcome but cannot seem to find what is holding them back from walking in victory over sin. Well, the Word of God gives us the answer to living in everyday victory over sin.

Some preachers have even taught that victory over sin is impossible. But is that based on God’s Word or their own experience? It is certainly not from God’s Word. We can live victorious over sin according to God’s Word:

Romans 6:13-14 NASB  and do not go on presenting the members of your body to sin as instruments of unrighteousness; but present yourselves to God as those alive from the dead, and your members as instruments of righteousness to God.  (14)  For sin shall not be master over you, for you are not under law but under grace.

For God to tell us not to do something means we must be able to do so. Notice sin shall not be your master; if it has mastery over you then you are defeated and giving in to sin. But if you master sin, then you can live in victory!

It is God’s will that all Christians overcome sin in their lives and live the Romans 6:14 life. The question is not a matter of if we want to, for all real Christians desperately want to live free from sin’s grip, but the question is how? Let’s go back to the book of Genesis and see how God operates to get some answers.

Genesis 2:9 KJV And out of the ground made the LORD God to grow every tree that is pleasant to the sight, and good for food; the tree of life also in the midst of the garden, and the tree of knowledge of good and evil.

There are two trees that Adam and Eve would see more than any other, just by the law of averages, because of the trees’ location. They would see a tree of Life and a tree of death – called the Tree of Knowledge of Good and Evil. Why did God put both of these in the Garden of Eden? Why not just the Tree of Life only? Because God always gives man a choice. He wants His creation to freely choose Him. Without choice, for example if there were no “death” tree available, then man really has no freedom. Giving man only one choice and saying, “Now choose” is really no choice at all. That would mean there is no freedom at all. That would not be consistent with the loving nature of our Heavenly Father. There is no love without giving His creation a freedom of choice.

Having a choice is not bad…in fact it is very good. Notice Who made the tree of the Knowledge of Good and Evil: God! Everything God made is good. He even said so Himself in Genesis 1:31, “And God saw every thing that he had made, and, behold, it was very good.”

Was God using that Tree of the Knowledge of Good and Evil to tempt them with evil? No, James 1:13 says, “Let no man say when he is tempted, I am tempted of God: for God cannot be tempted with evil, neither tempteth he any man.”  So what was that tree there for? To give man a free choice, to obey or disobey.

To not eat of that tree was the only prohibition God set up – the only law.  The tree gave man the opportunity to have faith in God. Adam and Eve should have said to themselves, “All I need is God, not what is on that tree.  I trust He knows what is best for me.” But the devil tempted man with the thought, “God is holding back on you – there’s more!”

The property of the fruit was not evil in itself. What was important was the command of God not to eat it. Adam and Eve crossed a line from which there was no return when they disobeyed. Man has a choice today to reject sin and rather choose God.

Gen 3:1 Now the serpent was more subtil [cunning; crafty] than any beast of the field which the LORD God had made. And he said unto the woman, Yea, hath God said, Ye shall not eat of every tree of the garden?

The tree of death was no temptation at all until the devil brought it to mind. Adam and Eve, before the temptation, simply believed God was telling the truth when He said, “You shall surely die…” Not until Adam and Eve started thinking on the thoughts of the devil did it become a temptation. And the same is true with you.

“Not until Adam and Eve started thinking on the thoughts of the devil did it become a temptation. And the same is true with you.”

Having a choice is not a temptation – only when the desire for evil begins does it become a temptation.  All desire starts with thinking about something.

James 1:14-15 KJV But every man is tempted, when he is drawn away of his own lust [desire] and enticed. (15) Then when lust hath conceived, it bringeth forth sin: and sin, when it is finished, bringeth forth death.

Every single temptation you have had is because of your own lust (strong desire) – not the devil’s lust, not someone else’s lust. We like to blame the devil for tempting us but that is usually just an attempt to throw blame on someone for our choice. The sin in the garden was man’s fault. The desire started with Adam and Eve, not the devil. The thoughts started with the devil but man could have rejected the thoughts. When man does not reject the thoughts, but rather chooses to think on them, it can produce desires.

“Desire is produced only one way: by thinking about something.”

When it moves from “She looks good” to “I want her,” it has gotten into your heart. You thought about her good looks too long until it got into your heart. Jesus warned us that adultery can take place in the heart. Adultery in the heart is just as serious as adultery in deed.  It is just as sinful and wrong. The more you think about how good she looks, the more you move toward a desire for her. All sin starts with thoughts (the head), which can produce desires (the heart), which can allow temptation, which can produce sin which produces death.

Genesis 3:2-5 NASB  The woman said to the serpent, “From the fruit of the trees of the garden we may eat;  (3)  but from the fruit of the tree which is in the middle of the garden, God has said, ‘You shall not eat from it or touch it, or you will die.'”  (4)  The serpent said to the woman, “You surely will not die!  (5)  “For God knows that in the day you eat from it your eyes will be opened, and you will be like God, knowing good and evil.”

Think about how hard it is to tempt someone who is perfect, living in paradise, and having all their needs met. Adultery? No one else around; how could they commit adultery in the Garden? Lusting for things? All was theirs; there’s nothing to lust for. Power? They had it all.  Murder? Nope, no one can die. The crazy thing about this temptation is that Satan gave thoughts to Adam and Eve which produced a desire in them to want things they already had!

So what did Satan use? That their “eyes will be opened.” But their eyes were already as opened as they could be.  They walked with God Himself and so had access to all wisdom and knowledge. Satan tempted them to be like God, but they were already made in the image of God!  Satan tempted them to know good and evil but they already knew good and evil when they were given the choice between a tree of Life and a tree of Death.

Gen 3:6 And when the woman saw that the tree was good for food, and that it was pleasant to the eyes, and a tree to be desired to make one wise, she took of the fruit thereof, and did eat, and gave also unto her husband with her; and he did eat.

Good for food?  They already had literally all the food in the world at their disposal. Pleasant to the eyes? Everything God made was pleasant to the eyes but the devil got them thinking on the one thing they were not to have. If the devil got Adam and Eve thinking about things to produce desire to allow temptation while they were in paradise, be sure it will happen to us. We have many things in the world to tempt us; many many more things are available that are forbidden to have.

“The only way to change your desires/lusts is to change what you are thinking on.”

Luke 8:11-12 NASB  “Now the parable is this: the seed is the word of God.  (12)  “Those beside the road are those who have heard; then the devil comes and takes away the word from their heart, so that they will not believe and be saved.

Notice the Word of God dropped all they way down into man’s heart just by hearing It and thinking upon It. But if the Word of God can be taken out of the heart, so too can bad desires! How? By changing what you think upon. This person Jesus is talking about heard the Word and thought upon It only superficially because they never got understanding (see Matthew’s version of the parable). You must have a genuine personal understanding of God’s Word for It to take root in your heart. Only then can your thoughts and desires begin to change to the things of God.

Well take this same principle and block all evil thoughts by choosing not to think on them. Replace what you have been thinking on with good things:

What you think about is what you will do! Notice the next verse:

Philippians 4:9 KJV  Those things, which ye have both learned, and received, and heard, and seen in me, do: and the God of peace shall be with you.

What you are putting in front of your eyes, on the TV or internet or reading in magazines/books? This is what you are thinking upon. If you allow those things to drop into your heart and produce a desire, you are sowing a seed – putting into motion a law of sowing and reaping. Be careful what you let into your eyes and ears because that fruit can be produced later in you.

The same way we have created evil desires in our heart is the same way we can create good desires, which will become our lifestyle: