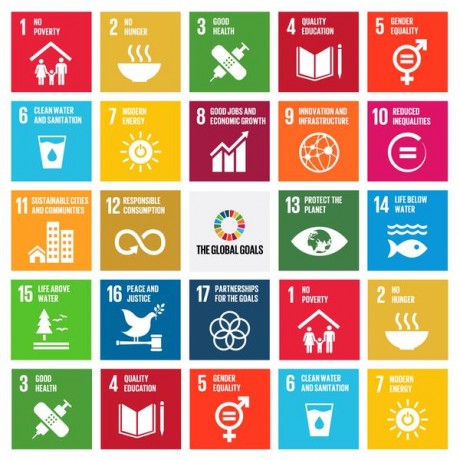 The UN’s Global Goals for Sustainable Development – Covenant with Many

The U.N.’s Global Goals for Sustainable Development is the “covenant with many” prophesied in Daniel 9:27

The Bible prophesies a government that all the world will wonder after (Revelation 13:1-14). It will be government that will attempt to rule all of mankind, i.e. a world government. That government is ultimately going to be a revised United Nations. Currently the United Nations is the only body set up to rule globally. Islam, which some have theorized to be the Beast kingdom of Revelation chapter 13, is not powerful enough or organized enough to rule the world. Not to mention, all the world will not pledge allegiance to Islam, but they already have  pledged allegiance to the U.N. and its Global Goals for Sustainable Development.

The system the United Nations will implement to rule all of humanity used to be call the New World Order, but today it is called Global Goals for Sustainable Development or Sustainable Development Goals (SDA’s) a.k.a. Agenda 2030. This is a new agenda put out by the U.N. September 25, 2015, however it is not really new – it is Agenda 21 on steroids. It was promoted by Pope Francis (who is possibly the false prophet), when he came to the United States. He pushed the Global Goals starting September 23, 2015 at the White House, then again September 24, 2015 at U.S. Congress, and again September 25, 2015 at the U.N. The four blood moons were a major sign, like massive sirens and blinking lights to get the Christian’s attention, that this is the “Covenant with many.”

Climate change is an excuse to implement worldwide Socialism/Communism. They will take from the rich countries and give to the poor. They will take from the rich companies and give to the poor peoples. They will take water, land, and property away from individual ownership and put it in the hand of government to redistribute as they see fit. There is no relationship between climate change, which is nothing more than normal weather, and poverty. However, “climate change leads to poverty” is the narrative we will hear over and over until the individual no longer owns property. We will all become equally poor except for the super-government and the elite, who remain insanely rich, that control it; that is the end result of the U.N.’s and Pope’s “equality”. These Global Goals are to begin January 1, 2016.

The U.N. has come up with 17 Global Goal for Sustainable Development. They all seem like good goals on the surface but what do the 17 goals really mean? They are not as innocent as they seem. If you understand their real goals, you will see they are becoming both clear and bold in their quest for world government.

These goals are not presented as a choice but rather a directive. The U.N. says, “All countries and all stakeholders, acting in collaborative partnership, will implement this plan.” That means all countries must participate. Then, “As we embark on this collective journey, we pledge that no one will be left behind.” That means no one is allowed to opt out. They will implement many taxes to take the individual’s, the corporation’s, and the wealthy country’s money. For example, they will literally make people pay for the very air they breathe and give it to the poor under a carbon credit system.

See another interpretation of the SDG’s here: https://www.zerohedge.com/geopolitical/agenda-2030-translator-how-read-uns-new-sustainable-development-goals

Ultimately, instead of you being independent and taking care of yourself, global government wants to make all the decisions for you because they know better than you what is best for you. Instead of the concept of the individual, we will move toward the concept of humanity being a whole organism and they are the head of that organism. You cannot decide what you want or need because it could hurt another part of the organism. They decide as they see fit and will take from one to give to another in the name of progress, fighting poverty, and saving the planet. This is the ultimate tyranny.

Soon this global government will be handed over to the antichrist who, I believe, is one of the masterminds behind this and is working in the shadows until he gains full power at the mid-point of the final seven years. I believe he will continue to remain hidden and will not be known as the antichrist until the very end of the seven years (see 2 Thessalonians 2:6 – 8 explanation). Satan has always done his best work covertly, not overtly. If a man shows up and does an overt seven year covenant with Israel, everyone will know he is the antichrist and he could accomplish nothing because the Church would call him out and resist him.  I believe Daniel 9:27’s “covenant with many” could be something like these Global Goals for Sustainable Development and no one is the wiser. The Bible never says the “covenant with many” has anything to do with Israel and the land; that is just an assumption many have made. The Bible never said it would be a seven year covenant; it just said the antichrist would confirm or strengthen it for seven years. It could be a 15 years covenant. Not to mention, most of the Church is pre-trib, so it is unfathomable for them to think they would still be on the earth during the final seven years… but they will be. In other words, I suspect we will be in the final seven years and most will not even know it.

September 23: The Pope’s Speech at the White House

September 24: The Pope’s Speech at the U.S. Congress

The Youtube video: ‘We The People’ for The Global Goals