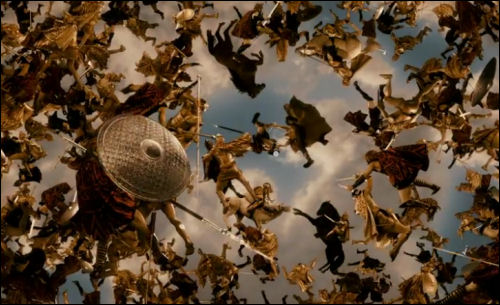 What is Second Heaven in the Bible?

The Bible says there are three Heavens. The first is the one we see is the physical realm above the earth, where birds fly and clouds move. Third Heaven is the place of God’s throne. But what and where is the Second Heaven?

Some people believe Second Heaven is what we call outer-space. They say it is a physical realm that we can see. But I would have to disagree and I can prove it by the Bible. Below are several scriptures on the subject for your study. See if you come to the same conclusion that I have – which is that Second Heaven is an unseen spiritual realm just above the Earth where Satan and his fallen angels rule (Spiritual Wickedness in High Places Eph. 6:12).

The Bible in Revelation references in three passages a place called “midheaven.”  Consider these Scriptures:

Rev 8:13 NASB  Then I looked, and I heard an eagle flying in midheaven, saying with a loud voice, “Woe, woe, woe to those who dwell on the earth, because of the remaining blasts of the trumpet of the three angels who are about to sound!”

Rev 14:6 NASB  And I saw another angel flying in midheaven, having an eternal gospel to preach to those who live on the earth, and to every nation and tribe and tongue and people;

Rev 19:17 NASB  Then I saw an angel standing in the sun, and he cried out with a loud voice, saying to all the birds which fly in midheaven, “Come, assemble for the great supper of God,

In the New American Standard version of the Bible (the best word-for-word translation available in my opinion), there is mentioned in the above passages a midheaven. In the Greek, the word here is mesouranēma – a compound of the word mesos meaning middle and  ouranos meaning heaven. According to the Thayer Definition it is 1) mid-heaven; 2) the highest point in the heavens, which the sun occupies at noon, where what is done can be seen and heard by all. I believe as you look at the passages in which midheaven, which I call Second Heaven in this article, is mentioned you will notice is a place where the spirit beings known as angels fly. But also birds fly there in the physical realm. This is proof one that it is a spiritual heaven above the earth yet in the physical realm it is close enough to the earth for birds to fly there.

Let us examine the heavens mentioned in the Bible:

Ephesians 2:2 NASB  in which you formerly walked according to the course of this world, according to the prince of the power of the air, of the spirit that is now working in the sons of disobedience.

Satan and His Angels Have Been Cast Out of Third Heaven

The first thing that we need to understand is that the fallen angel Lucifer, a.k.a. Satan or the Devil, was cast out of Heaven a long long time ago before mankind existed. This is described in Isaiah 14:12-20 and Ezekiel 28:11-19. But after he was cast out we see him reappear in Third Heaven, God’s Throne, in the book of Job. How could this be? He was forever banished from Third Heaven but in Job He’s there again!

The Bible says Satan is the god of this world (2 Cor. 4:4). Satan became the god of this world when Adam handed him the keys through sin. Satan as the god of this world now had access to Third Heaven again as the head over the Earth. He could not come to Third Heaven as a servant-angel of God ever again but he must be allowed back in because he runs the Earth. Satan is a spiritual steward over the Earth and has a “lease agreement” so-to-speak over the Earth. He does not have the title deed but he has a temporary agreement to stay, like a lease. He bought this lease from Adam through Adam’s sin.  I believe, if it were not for that, he would have been bound in the Abyss under chains of darkness a long time ago like many of the other fallen angels were.

However, since the time of Job something happened! Jesus, the Last Adam, came to the earth! He had authority from God to destroy the works of the devil. Jesus states this wonderful statement explaining the status of Satan from that point forward:

Luke 10:18 NASB  And He said to them, “I was watching Satan fall from heaven like lightning.

John 12:31 NASB  “Now judgment is upon this world; now the ruler of this world will be cast out.

Glory to God! Satan fell from Heaven. This must refer to Satan falling from the Third Heaven (again) for Satan today still has access to the Second Heaven as the god of this world. So what happened? A man finally appeared on the Earth that was not under Satan’s authority because Jesus never sinned! The Last Adam took His authority and distributed it to His disciples in Luke 10. So now there are two, and only two bodies of authority over the Earth and we all fall under one of these two: 1. the First Adam, headed by Satan, and 2. the Last Adam, headed by Jesus.

If Jesus said Satan has fallen from Heaven, then it must be true right? Of course, it is true that Satan no longer has access to the Third Heaven. Jesus is Lord! Jesus is now the highest authority over the Earth and so Satan no longer gets to stand before God in Third Heaven. Christ Jesus now is the highest authority over the Earth and He alone was worthy to break the Seven Seals in Revelation, which I believe to be the title deed to the Earth. Satan now can do nothing without Jesus Christ allowing it from Third Heaven.

The War in Second Heaven

There is coming in the last days a war in Second Heaven. In this war Satan will fall even farther than He has before. He has no access to the Third Heaven now and when the war takes place, him and all his evil spirits in the Second Heaven will be cast out into the Earth. None of them will have access to ANY of the Heavens at that point. All of them will be on the Earth at man’s level.

Rev 12:9  And the great dragon was thrown down, the serpent of old who is called the devil and Satan, who deceives the whole world; he was thrown down to the earth, and his angels were thrown down with him.
Rev 12:10  Then I heard a loud voice in heaven, saying, “Now the salvation, and the power, and the kingdom of our God and the authority of His Christ have come, for the accuser of our brethren has been thrown down, he who accuses them before our God day and night.

Rev 12:12  “For this reason, rejoice, O heavens and you who dwell in them. Woe to the earth and the sea, because the devil has come down to you, having great wrath, knowing that he has only a short time.”

Revelation chapters 12, 13, and 17 tell of a seven-headed Beast. This Beast represents a group of fallen angels which cause the will of Satan to be carried out in the Earth. The actions of the Beast heads (fallen angels) have been found throughout our Bible working the whole time. We are usually familiar with only two heads, fallen angelic powers, from the book of Daniel, “The Prince of Persia” and “The Prince of Greece.” However, I believe all seven heads are mentioned in various Bible passages, both Old and New Testaments . These fallen angels are the Spiritual Forces of Wickedness that operate in the Second Heaven.

Revelation 17:7, 9, 10 NASB  And the angel said to me, “Why do you wonder? I will tell you the mystery of the woman and of the beast that carries her, which has the seven heads and the ten horns… (9)  “Here is the mind which has wisdom. The seven heads are seven mountains on which the woman sits,  (10)  and they are seven kings; five have fallen, one is, the other has not yet come; and when he comes, he must remain a little while.

The “seven kings” are fallen angels that rule in the Second Heaven. The five fallen are those from before John’s time: Egypt, Assyria, Babylon, Medo-Persia, and Greece. The one in control in Second Heaven at John’s time is the King of Rome. And the one who has not yet come is the one that will rule in the end times.

Daniel 10:13 NASB  “But the prince of the kingdom of Persia was withstanding me for twenty-one days; then behold, Michael, one of the chief princes, came to help me, for I had been left there with the kings of Persia.

Daniel 10:20 NASB  Then he said, “Do you understand why I came to you? But I shall now return to fight against the prince of Persia; so I am going forth, and behold, the prince of Greece is about to come.

Isaiah 10:12 NASB  So it will be that when the Lord has completed all His work on Mount Zion and on Jerusalem, He will say, “I will punish the fruit of the arrogant heart of the king of Assyria and the pomp of his haughtiness.”

Ezekiel 29:2 NASB  “Son of man, set your face against Pharaoh king of Egypt and prophesy against him and against all Egypt.

Isaiah 14:4 NASB  that you will take up this taunt against the king of Babylon, and say, “How the oppressor has ceased, And how fury has ceased!

Revelation 14:8 NASB  And another angel, a second one, followed, saying, “Fallen, fallen is Babylon the great, she who has made all the nations drink of the wine of the passion of her immorality.”

Revelation 16:19 NASB  The great city was split into three parts, and the cities of the nations fell. Babylon the great was remembered before God, to give her the cup of the wine of His fierce wrath.

Revelation 17:5 NASB  and on her forehead a name was written, a mystery, “BABYLON THE GREAT, THE MOTHER OF HARLOTS AND OF THE ABOMINATIONS OF THE EARTH.”

Revelation 17:8 NASB  “The beast that you saw was, and is not, and is about to come up out of the abyss and go to destruction. And those who dwell on the earth, whose name has not been written in the book of life from the foundation of the world, will wonder when they see the beast, that he was and is not and will come.

The Beast heads are seven strong fallen angels, most of whom, shall come out of the pit to influence the Earth in the end times. They were in the Second Heaven in ancient times but were bound after their fall in the Abyss. They are known as the kings/princes of Egypt, Assyria, Babylon, Medo-Persia, Greece, Rome, plus Satan himself. This is how the “was” statement is fulfilled. The “is not” statement is fulfilled because by the time John wrote this, most of the fallen angels had already been bound again. However, they are all “about to come up out of the Abyss” and go to destroy the Earth. They are about to be back again in the end times in the Second Heaven.

The Second Heaven will be populated with ALL seven of the fallen angels at one time, instead of one-at-a-time like in ancient days. These are the days we are living in – those fallen angels are ruling now getting everything ready for the Great Tribulation, where Satan, the Beast, and the antichrist will consolidate their power.