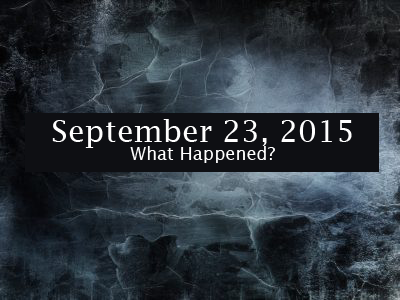 September 23, 2015 is a date many prophecy students were watching with anticipation. Could it have begun the final seven years?

September 23, 2015 was a special date in that it was around the time of the four blood moons. Plus, it was Yom Kippur – the Jewish Day of Atonement. I have found a Bible prophecy concerning Suleiman the Great that I have not seen on anyone talking about concerning this date and I want to show it you. This is going to blow your mind if you understand it! I believe we are near the Lord’s return and September 23, 2015 fulfilled certain events before the final seven years.

Are you ready to have your mind blown by a prophecy that was there all along but no one saw its meaning until just recently? Take a look:

Dan 9:24-25 KJV Seventy weeks are determined upon thy people and upon thy holy city, to finish the transgression, and to make an end of sins, and to make reconciliation for iniquity, and to bring in everlasting righteousness, and to seal up the vision and prophecy, and to anoint the most Holy. (25) Know therefore and understand, that from the going forth of the commandment to restore and to build Jerusalem unto the Messiah the Prince shall be seven weeks, and threescore and two weeks: the street shall be built again, and the wall, even in troublous times.


How can this verse tell us the general timing of Jesus’ return? All Bible prophecy folks know this passage as Daniel’s Seventy Weeks for Israel. Without going into detail, which you can find on almost any end-time website anyway, the Jewish people have had seventy weeks appointed to them. Verse twenty five tells the Jews exactly to the day when the Messiah, Jesus, would come the first time. My suggestion is that it comes close to telling us the general timing of when Jesus will return the second time as well!

So let’s start with how it predicted when Jesus would come the first time. Verse 25 says:

Dan 9:25 KJV Know therefore and understand, that from the going forth of the commandment to restore and to build Jerusalem unto the Messiah the Prince shall be seven weeks, and threescore and two weeks: the street shall be built again, and the wall, even in troublous times.

Sir Robert Anderson wrote a book called “The Coming Prince” in 1895. In it he proved that this prophecy in Daniel came to pass exactly to the day from when the command went out to rebuild and restore Jerusalem until Jesus rode into Jerusalem on a donkey! It goes something like this. The verse says from when the command went forth to rebuild Jerusalem, which was documented to be March 14th, 445 B.C. issued by Artaxerxes to Nehemiah, until the Messiah’s arrival would be seven weeks and sixty two weeks. A week is seven years. So a total of sixty nine seven year periods would occur (483 prophetic years) until the Messiah would show up. Jesus came into Jerusalem exactly to the day 483 years later! Amazing!

“The Julian date of that 10th Nisan was Sunday the 6th April, A.D. 32. What then was the length of the period intervening between the issuing of the decree to rebuild Jerusalem and the public advent of ‘Messiah the Prince,’ — between the 14th March, B.C. 445, and the 6th April, A.D. 32? THE INTERVAL CONTAINED EXACTLY AND TO THE VERY DAY 173,880 DAYS, OR SEVEN TIMES SIXTY-NINE PROPHETIC YEARS OF 360 DAYS, the first sixty-nine weeks of Gabriel’s prophecy.”

But what is interesting is that no one understood why the sixty nine weeks was divided up in a seven plus a sixty two…until now. A theologian named Joshua Elsom discovered that this same prophecy which predicted the timing of Jesus’ first coming could possibly also be used to discover the timing of His second coming. I found his revelation a few times on the internet and only a hand-full of people have even paid attention to it. Like Sir Robert Anderson, all you have to do is figure out when the command went forth to rebuild the walls of Jerusalem … THE SECOND TIME. Then add the 483 prophetic years and see where it takes you.

It turns out that a command did go forth to rebuild the walls a second time, because they were destroyed again in 70A.D. The edict was made by a Muslim called Suleiman the Great to rebuild the walls. You can look it up through Google or Wikipedia. So if we discover the date of Suleiman’s edict we can simply add the 483 prophetic years and come up with a date. But the bad news is that no one knows the exact date Suleiman made the order. I’ve researched it and the sources put it anywhere from 1535 A.D. to 1542 A.D. That would put the end of the 483 prophetic years somewhere between the years of 2011 to 2018!

So, why was Daniel’s prophecy divided in to seven weeks plus sixty two weeks instead of just saying sixty nine weeks?  Joshua Elsom worked backwards from the date that the Jews captured Jerusalem: June 7, 1967. If you subtract the sixty two sevens, or 434 prophetic years, from that you get 1539…a very likely year for the edict of Suleiman to rebuild the walls. Oh how I wish the exact date was recorded in history. I’ll bet you it was August 20, 1539 exactly 434 prophetic years (sixty two sevens) before. But unfortunately, we just don’t know for sure.

Anyway, what about the seven sevens that are left of the 483 year prophecy? Add the final 7 weeks, 49 prophetic years, to June 7, 1967 and you land on the what could have been a possible date of the beginning of the final seven years of Daniel’s Seventieth week…September 23, 2015. However, we are  now well past the middle of the proposed final seven years and nothing that was supposed to happen has happened. For example, the Jewish Temple needed to built so that daily sacrifices could start up again….but that did not happen. So what do I conclude?

I believe September 23, 2015 was an extremely important prophetic fulfillment for it was the day the coming “covenant with the many” prophesied in Daniel 9:27 was introduced to the world by Pope Francis. It is called the “U.N.’s Global Goals for Sustainable Development.” However, the introduction of the covenant did not begin the countdown of the final seven years. We again are in a gap of unknown time duration before the final seven year begins. Considering that the date set for the U.N.’s goals is the year 2030, we should start to see some very serious prophetic action begin here soon. Look for the Jewish Temple to be built. Look for the signs of fire and columns of smoke as prophesied in Joel 2:30. The 4 Blood Moons fulfilled the “blood” mentioned in Joel 2:30; now we look for the rest of that verse to be fulfilled. 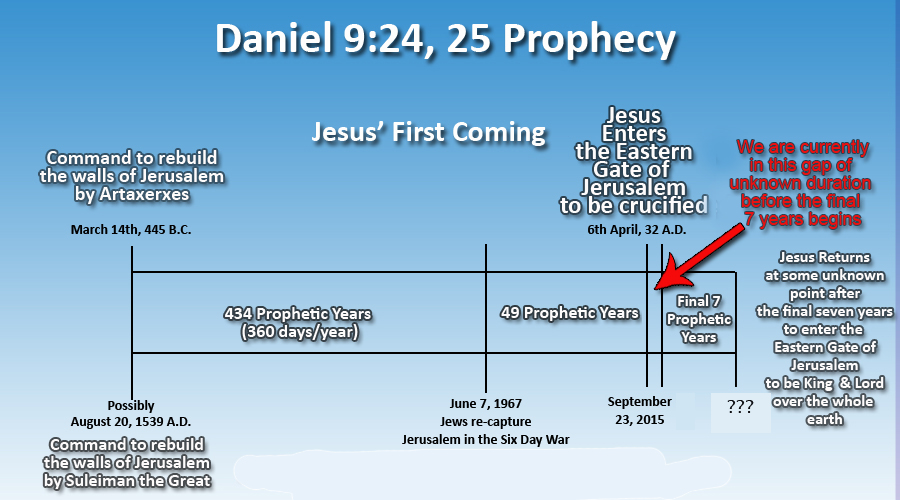