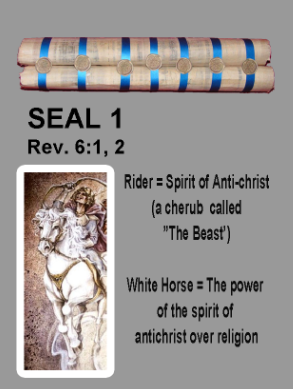 The First Seal Has Already Opened

Part 2 – The First Horseman Is Loose

Rev 6:1-2 ESV  Now I watched when the Lamb opened one of the seven seals, and I heard one of the four living creatures say with a voice like thunder, “Come!”  (2)  And I looked, and behold, a white horse! And its rider had a bow, and a crown was given to him, and he came out conquering, and to conquer.

What Is The First Seal?

Some say the first Seal is Jesus on the white horse but that conclusion is not consistent with the nature of the riders on the horses. All of the riders have a menacing and foreboding effect on Earth. All of them seem to be of the same character. The four riders are of demonic nature and have the effect of preparing the world for the antichrist through deception and destructive means. The world will then fall into chaos and they will swoon at the opportunity for a “messiah” to save them, namely the antichrist.

Because of the rider’s influence over the centuries, the other riders and horses come under his influence and deception.  I believe the spirit of antichrist was released after Christ’s resurrection (1 John 2:18, 4:3; 2 John 1:7). This antichrist spirit started with the Jews that rejected their Messiah, Christ Jesus. They opposed Him, His Message and His messengers throughout the ministry of Jesus. They continue to resist Jesus even unto today. However, the most visible hallmark of the antichrist spirit today is the rise of the Roman Catholic Church. Therefore, it is around the 4th century when the Roman Catholic Church was born that I use as the starting point for the release of the seal even though it actually occurred earlier according to 1 and 2 John.

Proof That The First Seal Has Occurred

The rider on the white horse culminates in a counterfeit of Jesus’ Second Coming – a false messiah and false move of God. The deception that they bring can be seen in things such as the move toward a one-world religion. This includes religious plurality, syncretism, universalism, ecumenism and moral relativism. The world has already been transformed into this mind-set in which true Christianity is the enemy because it is hindering the move toward unity of the world under the banner of peace.  Christianity and its teachings are considered rigid and counter-productive to the world-community. Therefore, true Christianity must be done away with to pave a new path toward tolerance so that we can all get along on planet Earth. Christianity is painted as the enemy of world-peace because of our stand on absolute truths. We unabashedly hold to the Word of God which teaches there is no other way to God except through Jesus and there is no peace without following God’s Word.

Christianity used to be the dominate belief system of the United States but now it has become more of an Enemy of the State. A country so dominated by Christianity for hundreds of years then becoming secular within a few decades, starting in the late 60’s, shows a definite change has taken place in the heavens. Now this anti-Christian mind-set is increasing exponentially with the goal of eradicating Christianity altogether. False religions like New Age, Paganism, mother earth worship, and even violent Islam are celebrated yet Christianity has to go. The Christian and Conservative voice must be silenced because they stand in the way of progress. The First Seal, the rider on the white horse, is loosed and has been for some time. He has conquered the thinking of the world through deception (2 John 1:7).

Mat 24:5 KJVA  For many shall come in my name, saying, I am Christ; and shall deceive many.

There are some people today claiming to be the Messiah such as Vissarion, De Jesus, and Maitreya. But notice that the Bible claims “many” will come. Do we have many claiming to be Jesus? Not really.  I believe this passage has an alternate interpretation than what has been taught traditionally that we need to consider.  Besides being “many” notice also that they come in His name…they come claiming to be sent by Jesus and to be standing in the stead of Jesus preaching the Word of God. If we translate the Greek word “Christ” it means “Anointed”. So we could translate this to say, “many shall come in My name, saying, I am anointed; and shall deceive many.”  I’m not a Greek expert but if it could be translated that way, it opens this verse up in a whole new way.  All Christians have the claim that they are anointed because they receive the Holy Spirit upon conversion.  Could the verse mean anyone claiming to be anointed and claiming to be sent by Jesus, in other words anyone falsely claiming to be a Christian, be a fulfillment of this verse?

I believe the clearest version of this false Christianity and deception can be epitomized through the Roman Catholic system. Not to say all Roman Catholics are false Christians; absolutely not! Some are true followers of Jesus that have gained a real relationship with God through the born-again experience. However, the Roman Catholic system is definitive religion – the very opposite of a relationship with God through Jesus. It is a deception because it mixes with paganism, such as the worship of Mary, works salvation, and many false doctrines, yet it claims to be Christian.   The Pope is the very personification of religious plurality. The Pope Francis is currently teaching Universalism – everyone goes to Heaven no matter what religion you are. That is absolute false doctrine. Such notions are the very opposite of true Christianity. This type of heresy is the very thing that lays the groundwork for the antichrist to work.

This first seal is the revealing of a white horse. White indicates a type of righteousness or holiness. The Roman Catholic Pope is almost always in white to indicate his righteousness. He is supposed to be the anointed spokesman for God in the Earth. However, the Bible never appointed a Pope. It was the revelation that Jesus was the Son of God and the Christ that Jesus establishes His Church upon, not a man called Peter (Matt. 16:16-18).

Since its inception the Roman Catholic Church has been a mixture of false religions but claiming to be Christian. The most obvious mixture is the mother/child worship which is an ancient Babylonian Mystery Religion that has been around for thousands of years. Obviously worshipping Jesus is right because He is God. But to add the worship of Mary is the indicator that a deception has be inserted and given the label of Christian.

In Roman Catholicism Mary is called the “Mother of God” and the “Queen of Heaven.” She is venerated and prayed to but she was just a human. She was not the mother of God – she only provided a womb for Jesus’ flesh. She biologically added to His flesh but the real Jesus, his spirit, existed in eternity past! To call her the “Mother of God” is to bring Jesus down in value to that of a mere man or exalt a mere woman, Mary, to the place of God. Both are absolutely heinous and unthinkable. Just because they claim to be worshipping the Jesus of the Bible does not mean that they are. That is where so many false Christians are today, both Catholic and Protestant, – claiming to worship God but they do not know Him.

This pagan mother/child worship goes back to ancient Babylon with Nimrod, his wife Semiramus, and their child Tammuz. In this un-holy trinity, Nimrod stands in the place of God, his wife was called “The Queen of Heaven”, and the resurrected-from-the-dead child was Tammuz.

“Semiramis became known as  the “queen of heaven,” and was the prototype from which all other pagan goddesses came.” –World Religions by David Terrell

“Semiramis, in particular was the model and original of every goddess and female cult figure in the ancient and modern worlds.” –SEMIRAMIS, QUEEN OF BABYLON by Bryce Self

“Nimrod and his mother (Semiramis) became the chief entities of worship as a Madonna and child. This belief and practice spread to Egypt, where the names of the gods were Isis and Osiris. The son Osiris was born December 25. In Asia it was Cybele and Deonius. In Rome they were called Fortuna and Jupiter. Throughout the world we still find the remnants of  other and child worship to this day.   It is no surprise that this same system still exists at the end of the age. It is called “Mystery Babylon” (Rev 17:5).” –The Bible as History by Werner Keller

For a full study of the false religion of Roman Catholicism, you may want to read the book by Alexander Hislop, “The Two Babylons”. You will discover that the un-holy trinity has spanned time since the Tower of Babel in many changing forms but has landed in this time embodied in the Roman Catholic system. In both a general and specific way, the Roman Catholic system exemplifies the deception of the white horse and its rider offering a false messiah and false move of God in the end time.

The Roman Catholic system is the most visible religious system that personifies the spirit of antichrist but that is not to say that it will be the one-world religion prophesied to come. Actually, the one-world religion to come is better defined as a combining of all non-Christian religions to some degree. The lie being taught today is that all religions contain truth so they are all okay as long as they are not exclusive – saying that your religion is the only way to God/Heaven. Of course, true Christianity is very exclusive. But their hypocrisy will be evident when they also accept exclusive religions like Islam yet still reject Christianity. That is happening today and you can see the deception and motivation behind the move toward a one-world religion which I simply label as anti-Christian. We are living in the days of choosing sides, light or darkness. It is clear today you either accept the one-world religion of anti-Christian or you accept true Christianity. Everyone is being presented this choice on the planet. What do you choose? And your choice will be tested. Are you willing to die for your faith in Christ?

The color white – Using the Bible hermeneutical Law of First Mention, we discover that the color white is first mentioned in reference to burning burning bricks white in the construction of the tower of Babel, hence false religion. Gen 11:3 NASB  “They said to one another, “Come, let us make bricks and burn them thoroughly.” And they used brick for stone, and they used tar for mortar.”