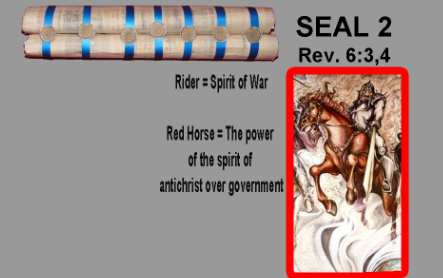 The Second Seal Has Already Opened

Part 3 – The Second Horseman Is Loose

Rev 6:3-4 KJV  And when he had opened the second seal, I heard the second beast say, Come and see.  (4)  And there went out another horse that was red: and power was given to him that sat thereon to take peace from the earth, and that they should kill one another: and there was given unto him a great sword.

Mat 24:6, 7a  And ye shall hear of wars and rumours of wars: see that ye be not troubled: for all these things must come to pass, but the end is not yet. For nation shall rise against nation, and kingdom against kingdom…

The book of Revelation describes the second rider of the horse as one that was given power to take peace from the earth so that men kill one another. He was given a “great sword” to perform his work. This rider is associated with war as described by Jesus in Matthew 24: 6 as He talks about wars and rumors of wars in the end time.  The horse itself is red which is the color of blood. The horse represents government and the rider represents the spirit of anti-christ over government resulting in wars.

Since the time of Christ there has been much war and bloodshed leading up to the times we now live in. War over the last century has become more brutal with the advancement of modern weapons and weapons of mass destruction.

War not only destroys, which is a major plan of the devil, but it also causes man to be desperate for a savior from all the destruction…even if that “savior” ultimately destroys as well. And so, enter the world government United Nations to save, soon to be led by the antichrist himself.

I believe the Second Seal was released somewhere around the 19th century with the advent of Marxism/Communism. These ideologies has led to murder on a massive scale in the Communist countries.

Consider what we have seen in the last century of war.  World War I killed around 16.5 million. By World War II man invented the atomic bomb which today many countries possess. Those governments have the power to destroy nearly all life on the earth with their nuclear arsenal. World War II in the 1940’s killed 85 million. If we have a third world war with the capabilities of destruction man now possesses, almost seven decades after the nuclear bomb was invented, how catastrophic would it be!