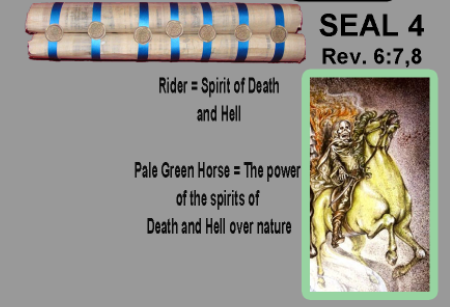 The Fourth Seal Has Already Opened

Part 5 – The Fourth Horseman Is Loose

Rev 6:7, 8 And when he had opened the fourth seal, I heard the voice of the fourth beast say, Come and see. And I looked, and behold a pale horse: and his name that sat on him was Death, and Hell followed with him. And power was given unto them over the fourth part of the earth, to kill with sword, and with hunger, and with death, and with the beasts of the earth.

Matt 24:7 …and pestilences, and earthquakes, in divers places.

The word “pale” in the Greek is actually the color green. The pale horse represents nature so when the spirits of Death and Hell ride it results in death for millions on planet earth. Jesus’ commentary on the four horsemen is found in Matthew 24. In order, He describes the first three Seals perfectly as false Christs/Christians (vs. 5), wars and rumors of wars (vs. 6), then famines (vs. 6). The fourth seal is described as “pestilences, and earthquakes.” You may ask how that relates to Revelation mentioning sword, hunger, death, and beasts of the earth? You must remember that these seals are mentioning spiritual forces, not natural. So it is not talking about natural swords here, i.e. not men fighting wars. It is talking about a spirit going forth to cause destruction. If we could see into the spirit realm, that spirit would have a sword in his hand but his power in the earth is carried out in the natural realm as pestilences and earthquakes.

1 Chronicles 21:14-16 KJV (14) So the LORD sent pestilence upon Israel: and there fell of Israel seventy thousand men. (15) And God sent an angel unto Jerusalem to destroy it: and as he was destroying, the LORD beheld, and he repented him of the evil, and said to the angel that destroyed, It is enough, stay now thine hand. And the angel of the LORD stood by the threshingfloor of Ornan the Jebusite. (16) And David lifted up his eyes, and saw the angel of the LORD stand between the earth and the heaven, having a drawn sword in his hand stretched out over Jerusalem. Then David and the elders of Israel, who were clothed in sackcloth, fell upon their faces.

God sent pestilence on Israel for David’s disobedience. Notice the angel has a sword in the spirit realm but it is carried out on earth as pestilence. The same is true with the Fourth Seal. The Fourth Horsemen will have a sword in the spirit that will cause pestilence and earthquakes in the earth resulting in hunger, death, and destruction by beasts of the earth. This is the power of the Spirit of Death over nature.

All of these horses (religion, government, economics, and nature) have been around since the beginning of time. They are the major forces that influence man and the course of life on planet earth. There were around since days of Zechariah who had a vision of them in Zechariah 6.

Zechariah 6:5 And the angel answered and said unto me, These are the four spirits of the heavens, which go forth from standing before the Lord of all the earth.

Jesus described the finals days as a woman in labor; they will be days of contractions that increase in the frequency of pain and the intensity of pain as we draw closer to the end.  Labor pain for woman came about as a result of sin. It is part of the curse of sin. So it is for the earth. Sin has so gripped the planet that the planet itself is in pain, not because of man-made factors like CO2 as the lie of global warming would have you to believe, but simply because of sin.

We know of many major natural disasters that have occurred such as earthquakes like Jesus mentioned in Matthew 24:7.  In 1976 the Tangshan Earthquake killed 255,000 in China. Since the 1960’s earthquakes have been recorded as having increased in both frequency and intensity. In 2011, the Tohoku Earthquake hit Japan causing a Tsunami and a meltdown of the Fukushima Daiichi nuclear reactor. It was the fifth most powerful earthquake in the world ever recorded.

The Greek word for “earthquake” that Jesus mentioned in Matthew 24 can also refer to a tempest. We have had some of the worst hurricanes and typhoons in human history recently. In 2005 we had Hurricane Katrina hit the Gulf Coast which was in the top five worst hurricanes to ever hit the United States. In November of 2013, Typhoon Haiyan hit the Philippines being the deadliest Typhoon on record.

Notice that these spirits of Death and Hell have authority to do what they do to over 1/4 of the earth. They have the tools of “hunger and with death, and with beasts of the earth”.  These beasts of the earth are not just the visible kind but also the invisible kind – the microscopic kind; namely infectious and parasitic diseases.  I looked up the leading causes of death and found out that over 27% of mankind  is killed by three factors: 1. war and violence/sword (1.28%), 2. malnutrition/hunger (1.31%), and 3. infectious and parasitic diseases/beasts of the earth (23.04%). That  is more than 1/4 of mankind just as the Bible predicted! And that does not include those killed by death which I believe is a reference to those killed by natural disasters. That is exactly what the prophecy says; 1/4 of the earth under this fourth horseman will die! We are living in the days of the Fourth Seal right now!

What Does All This Mean?

Does this mean we are to live in fear? No, absolutely not! Through all of the first seals, we are still here! If you believe the Word and stand on the promises of God’s Word, the influences of the Spirit of Antichrist over religion, government, economics, and nature will have little to no effect on you besides persecution. And if we should die, death has no sting for we are immediately going to be in the presence of the King of Kings and Lord of Lords! Hallelujah! Any pain and suffering we experience in this life will be forgotten once we get there and experience Heaven. The joy is so great there, it will not even be worth mentioning what we went through here. But as long as we are here, we are here for a reason. God still has work for you to do. It is time to get the Gospel of Jesus Christ out to this dark and hurting world because they do not have much more time before it is too late. Will you focus on yourself or on them who need what you have – the Light of the Gospel ?

The color green – Using the Bible hermeneutical Law of First Mention, we discover that the color green is first mentioned concerning green plants, hence nature. Gen 1:30 NASB “and to every beast of the earth and to every bird of the sky and to every thing that moves on the earth which has life, I have given every green plant for food”; and it was so. ” Notice also the mention of beasts of the earth just as those mentioned in Rev. 6:8 concerning the Fourth horse and its rider, Rev 6:8 NASB “I looked, and behold, an ashen horse; and he who sat on it had the name Death; and Hades was following with him. Authority was given to them over a fourth of the earth, to kill with sword and with famine and with pestilence and by the wild beasts of the earth.”  The beasts of the earth may also include the microscopic types such as viruses and diseases. Also this horse has an association with the fourth horse of Zec. 6:3, being speckled or dappled. The Hebrew root word for speckled is hail, implying storms.