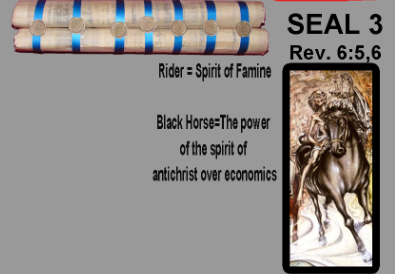 The Third Seal Has Already Opened

Part 4 – The Third Horseman Is Loose

Rev 6:5, 6 And when he had opened the third seal, I heard the third beast say, Come and see. And I beheld, and lo a black horse; and he that sat on him had a pair of balances in his hand. And I heard a voice in the midst of the four beasts say, A measure of wheat for a penny, and three measures of barley for a penny; and see thou hurt not the oil and the wine.

We may associate the color black with things like death and plague but the Bible associates it with economics. In fact, black happens to be the official color of Capitalism.  The rider on this horse is Famine.  The horse represents economics; therefore, the rider is the power of the spirit of anti-christ over economics which results in famine.  Notice the balances in the rider’s hand. Balances have traditionally been used in commerce to weigh commodities to assess proper value for sale. This black horse rider, Famine, will cause the cost of food to become cruelly expensive. Inflation is on its way. Even the cheapest of foods, barley, will take a full day’s work to pay off.

Notice the mention of the economic basics of buying and selling food – the necessities of life. Jesus mentions it in the word “famines” in Matthew 24. Due to economic chaos there will be food shortages in various places in the earth. When people are hungry they become desperate. Crime will increase. Government leaders will make rash decisions based on fear of famine leading to all kinds of societal woes.

I believe the Third Seal was opened sometime in the 20th century when world trade and stock markets became our economic foundation. World trade and stock markets are not evil in themselves but when they get into the hands of secular men, they become based on fear and greed. Therefore, the markets are destined to collapse around the world because there is no sure foundation under them.

We have seen this many times since the early 20th century. The greed of men running corporations led to monopolies controlling much of the world’s economics. Eventually anti-monopoly laws were enacted but we can see the damage when a single corporation owns an entire commodity; they can set there own price and no one has the power to stop them from settings astronomical prices that destroy an economy. Of course, we have also seen markets collapse with the Great Depression, the Oil Crisis in the 1970’s, the Black Monday in 1987, The Asian Financial Crisis in 1997, the Sub-Prime Mortgage Crisis in 2008, and the Corona Virus crash.

Capitalism along with anti-monopoly has created a much more stable and fair economy around the world when implemented correctly. However, what is happening right now is the Socialists wants to control the world markets. Remember, the red horse and rider, government controlled by the spirit of antichrist, was released just prior to the Third Horseman. Socialism is taking over the world markets to steal from the producers to give to the poor so as to gain more power because there will always be more poor than rich.

This is happening through entities like the Federal Reserve which is neither Federal nor is it a reserve. So if the world pushes Democracy, putting it into the hands of the poor to vote into power who they want, the poor will always vote for those who will give them more money regardless of how that money is gained. It becomes ironic how a democratic process puts Socialists into power who then take over Free Market. The end result? Hyper-Inflation, market failure, and famines nearly world-wide. We are living in the days of the Third Seal and The Third Horseman. We can all feel it in our wallets and the bad news is that it is only going to get worse. Put your faith not in money but in God!

The color black – Using the Bible hermeneutical Law of First Mention, we discover that the color black is first mentioned in reference to the wages paid to Jacob from Laban, hence economics. Gen 30:32 NASB “let me pass through your entire flock today, removing from there every speckled and spotted sheep and every black one among the lambs and the spotted and speckled among the goats; and such shall be my wages.”